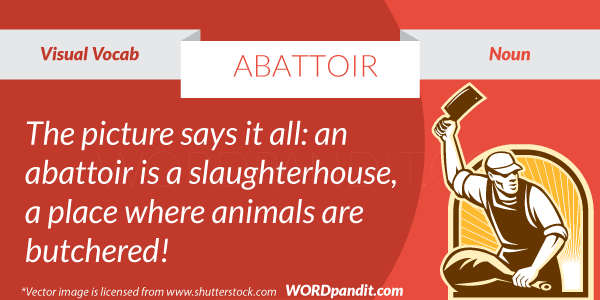 The world has a few gruesome sights. Seeing them can make the strongest of bellies ache. One such place is the slaughterhouse. The sight of such a place can change people’s eating habits at times.

ABATTOIR is that horrible place. It can sicken a lot of people and that’s why we have refrained from putting a direct picture of a slaughterhouse.

The dictionary definitions for ABATTOIR are as follows:
1. A slaughterhouse (A building where animals are butchered). (noun)
2. Something likened to a slaughterhouse. (noun)

Masters Tip to remember ABATTOIR:
The word Abattoir originates from the french Abattre, which means “to beat down.”
What is done with animals in a slaughterhouse? They are beaten down to death.

Usage Examples for ABATTOIR:
1. The Supreme Court, which had in July 2004 directed shifting the slaughter house to Ghazipur, on Wednesday refused to interfere with the deadline fixed by the Municipal Corporation of Delhi ( MCD) for closure of the British- era abattoir.
2. Two cows had to be rescued by the Coastguard after swimming out to sea when they escaped from an abattoir in Sitra.