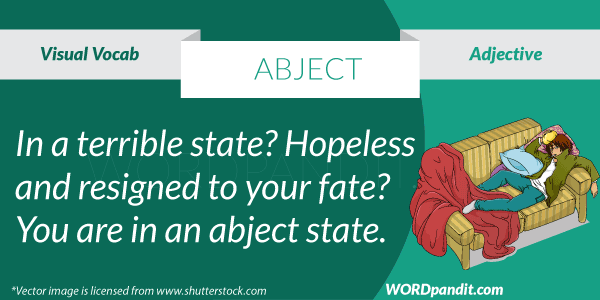 Misery can come in many shapes and sizes, but one of the most common faces of misery is that of poverty. And the word abject is found most often as a partner to the word poverty. The phrase ‘abject poverty’ is a ubiquitous as poverty itself.

It is not a pretty scene to remember but we are only doing so to learn the word. And the image of the word reminds of the same connection: the miserable and abject conditions that poverty has brought in Africa.

Usage of the word Abject:
1. An ugly totem for the abject failure of our criminal justice system. –www.guardain.co.uk
2. The minister was told by the press that most of the children at the orphanage were living in abject poverty.