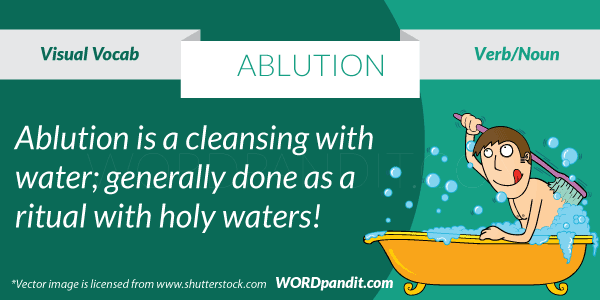 The term ablution, in terms of origin, comes from the Latin root, abluto, which means to wash or clean. This basically gives the word ablution the meaning ‘washing’. The word ablution can be used for far ranging purposes, from ordinary washing to hand washing to ritual wash of the body.  An extension of the same is that one can use ablution to refer to a collection of activities performed to produce physical cleanliness. Broken down to simpler levels, this basically means that activities one performs to get ready in the morning, say brushing one’s teeth, shaving and taking a bath: the whole composite can be referred to as ablutions.

The dictionary definitions for ablution are as follows:
1. a cleansing with water or other liquid, esp. as a religious ritual.
2. the liquid thus used.
3. a washing of the hands, body, etc.

The simple association that one needs to make to remember ablution is sacred washes.

Each religion has its own prescriptions, with each one promising to cure an individual of the sins and remove all the necessary evils. These ritual washings range from completely immersing the body in sacred waters to a simple cleansing of one’s hands.

Different examples of these ablutions are as follows:

Usage examples for Ablution:
1. Darcy may perhaps have HEARD of such a place as Gracechurch Street, but he would hardly think a month’s ablution enough to cleanse him from its impurities, were he once to enter it; and depend upon it. -Mr.Pride and Prejudice by Austen, Jane
2. The millmen resolved to bestow public honors on Dominicus Pike, only hesitating whether to tar and feather him, ride him on a rail, or refresh him with an ablution at the town pump, on the top of which he had declared himself the bearer of the news. –From Twice Told Tales by Hawthorne
3. He had found his soup too hot, and thrown it at the head of the chief turnkey, who in consequence of this ablution had been put to the inconvenience of having his skin come off as he wiped his face. -The Black Tulip by Dumas, Alexandre