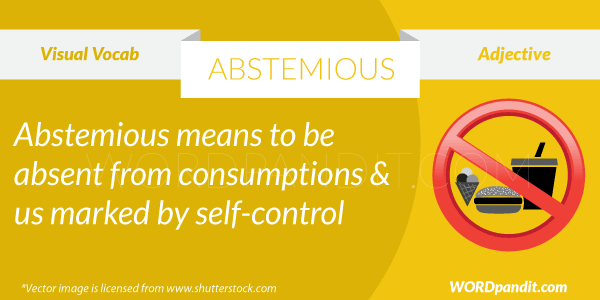 The word ‘ABSTEMIOUS’ is only difficult to pronounce but it is very easy to remember. The dictionary definition for abstemious is as follows:
1. sparing or moderate in eating and drinking; temperate in diet. (adj.)
2. characterized by abstinence: an abstemious life. (adj.)
3. sparing: an abstemious diet. (adj.)

Masters Tip to remember Abstemious:
The word ‘abstemious’ can be remembered with the help of one very simple tip: relate it to the ‘Buddha’ and the tenets of sects like ‘Buddhism’. These essentially convey to its follower that one needs to adopt a simple and austere way of life, with restrain being important virtue of one’s life. There are a few sects in this world which take this concept to the extreme and start to talk in terms of self denial. Abstemious is not one such extreme word but it does imply a moderation and avoiding of excesses.

So the simple tip for this word: Abstemious equals to Buddha and the restrained way of life he preached.

Usage:
In terms of usage, the word can be used in the following ways:
1. Surprisingly abstemious in a scene rife with temptation, she and her lover Robert Mapplethorpe traded hunger and privation for their places in the pantheon of art. — The Guardian, “Readers recommend their favourite books of 2010”
2. The islanders are somewhat abstemious at this repast; reserving the more powerful efforts of their appetite to a later period of the day. -Typee by Melville, Herman