What does Aceto Root Word mean?
The Aceto has been derived from the Latin word which means acidic or acescent .Aceto is commonly used for complex words such as acetometer and most commonly used in chemical compounds such as acetic acid.
To have a better understanding let’s have a look at the word acetobacter, which can be broken down into:
Aceto: Meaning acetyl group in chemicals.
Bacter: Meaning a type of bacteria.
Aceto+Bacter: Rod shaped bacteria used to prepare vinegar.

Example Sentence:
Acetone is a primary constituent of polish remover. 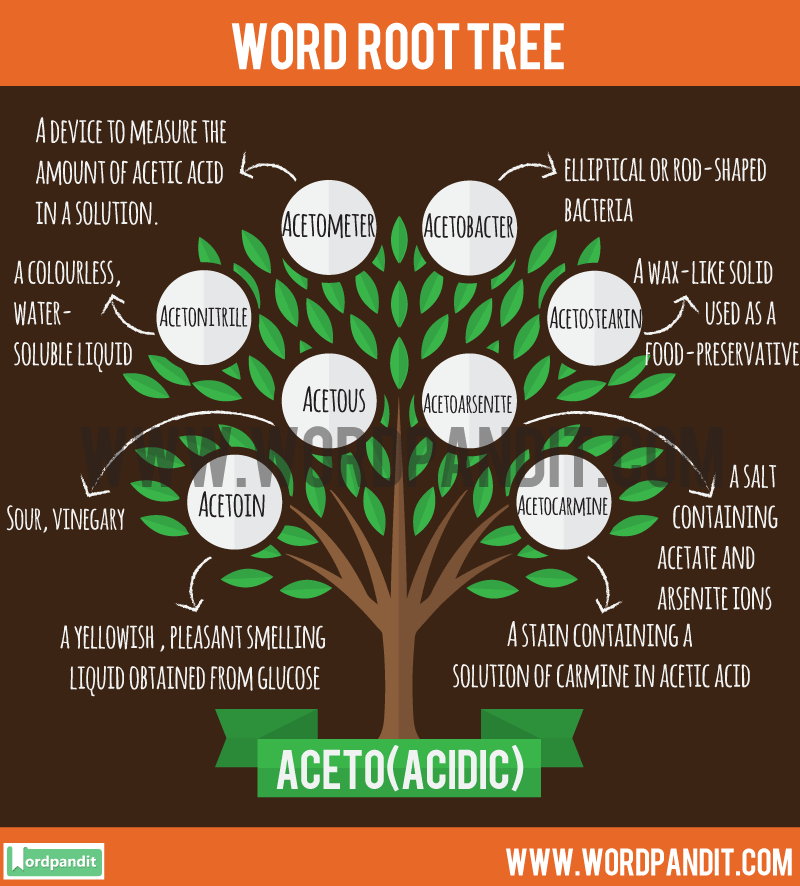 Words Based on the Aceto Root Word

Following is a list of words based on Aceto root word:

1. Acetometer : It is a device used to measure the amount of acetic acid in a solution.
2. Acetobacter : Elliptical or rod-shaped bacteria which are used to prepare vinegar.
3. Acetonitrile : Also called Methyl cyanide. It is a colorless, water-soluble liquid used as a solvent.
4. Acetostearin : A wax-like solid used as a food-preservative
5. Acetoin : A yellowish , pleasant smelling liquid obtained from glucose fermentation, and is used in preparation of essences.
6. Acetous : Sour, vinegary.
7. Acetolysis : A decomposition reaction between a compound and acetic acid.
8. Acetocarmine : A stain containing a solution of carmine(purple pigment) in acetic acid.
9. Acetoarsenite : A salt containing acetate and arsenite ions.
10. Acetophenone : An aromatic ketone used in formation of large number of organic compounds like dyes, deoderants etc.