What does Acious /Acity Root Word mean?
The Acious/Acity word is often used as a suffix to form words which means having the ability to do something or inclined to do something, the first time I came across acious as a suffix was when my school teacher described my personality as Loquacious which was a big term and I was curious to know what it actually meant. Let’s break it down to understand the meaning of the word loquacious

Example Sentence:
Her friend is loquacious, though she has veracity in whatever she speaks. 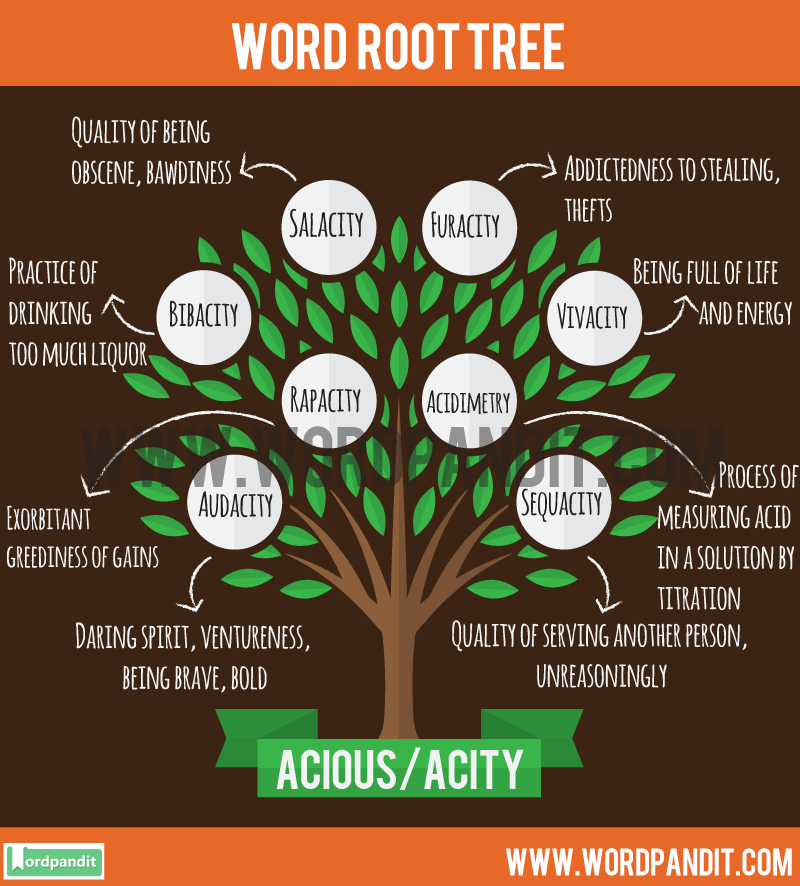 Words Based on the Acious/Acity Root Word

Following is a list of words based on Acious/Acity root word:

1. Perspicacious : Having the ability to see perspective, in other words clear-sighted.
2. Inefficacious : Ineffective, not being able to produce the desired result.
3. Contumacious : Rebellious or insubordinate.
4. Pertinacious : Resolute in purpose or belief.
5. Fallacious : Deceptive or misleading.
6. Mendacious : Telling lies, someone who is dishonest.
7. Hellacious : Remarkable , wonderful (“That was a hellacious catch in the deep”)
8. Predacious : Preying on others.
9. Sagacity : Being wise
10. Salacity : Quality of being obscene, bawdiness.
11. Furacity : Addictedness to stealing, thefts.
12. Bibacity : Practice of drinking too much liquor.
13. Sequacity : Quality of serving another person, unreasoningly.
14. Audacity : Daring spirit, ventureness, being brave, bold.
15. Rapacity : Exorbitant greediness of gains.
16. Vivacity : Being full of life and energy.
17. Emacity : Fondness of buying stuff.