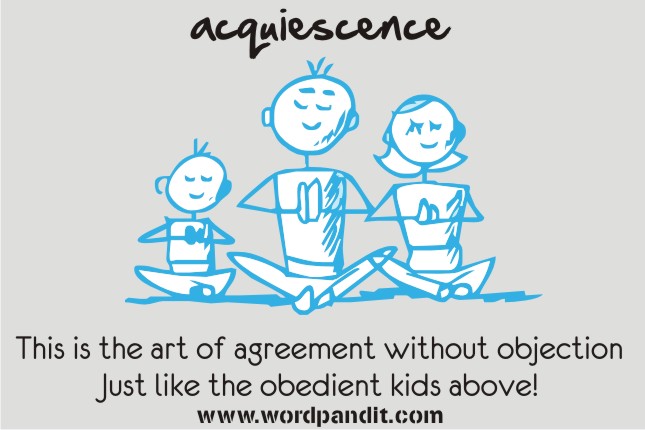 Remember, in Harry Potter and Order of the Phoenix, when Dumbeldore refuses to go to Azkaban as ordered? Well, that is just opposite of Acquiescence. This word is used when a person comes quietly as a decision is taken. Else, when a mother buys chocolate to appease her child, she has just acquiesced.

Origin
Acquiescence is a noun and its first usage dates back to 1625-35. It has originated from the union of two words acquiesce and ence. Former means to submit without protest and latter is a noun suffix.

The dictionary definitions for acquiescence are as follows:
1) Assent or agreement without objection. (noun)
2) The act or condition of giving assent quietly. (noun)

Master tip to learn acquiescence:
Taking into consideration the meaning of acquiescence, it can be easily confused with permission. However, these words are very different from each other. Acquiescence means to comply with a decision whereas permission means to ask for consent.

Acquiescence can also be learnt easily by associating the word with the essence of aqua. Acquie (aqua) scence (essence).

Acquiescence can be used in following ways:
1) It was the acquiescence of the world with U.S.A that averted the III world war. (used as a noun)
2) She acquiesced to her son’s demand to buy a toy car. (used as a verb)
3) She is usually very acquiescent to all the decisions that the management makes. (used as an adjective)