The root word-alb comes from Latin –albus, meaning white that usually is used in words that denote white or bright. Let’s look at ‘albino’ for instance:
Alb: White
Ino: Meaning a person.
Alb+Ino: An albino is a person or animal with abnormally white skin and hair, resulting from a lack of pigment, hence albinism for the condition.

Example sentence,
He is suffering from albinism since birth. 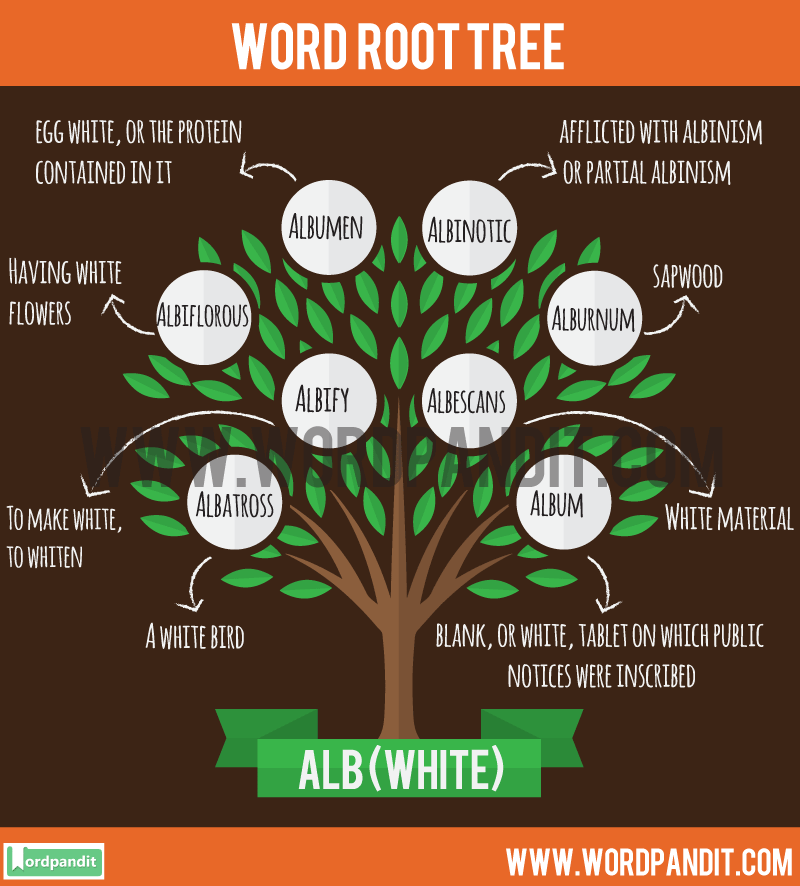 Words Based on the Alb Root Word

Following is a list of words based on the Alb Root Word:

1. Albedo: The extent to which a celestial body reflects light; how bright it is.
2. Albumen: Egg white, or the protein contained in it.
3. Albinotic: Afflicted with albinism or partial albinism.
4. Alburnum: Sapwood.
5. Albeduria: The passing of pale or white urine of low specific gravity, as in chyluria. Also albinuria.
6. Albescans: White material.
7. Albescent: Growing or becoming white; shading or passing into white.
8. Albicans (s), Albicantia (pl): White.
9. Albiculi: White people; used as a derogatory term.
10. Albification: The process or art of making white; chiefly as a term in Alchemy
11. Albiflorous: Having white flowers.
12. Albify: To make white, to whiten.
13. Alba: White matter
14. Alb: A tunic or vestment of white cloth reaching to the feet, and enveloping the entire person; a variety of the surplice, but with close sleeves; worn by clerics in religious ceremonies, and by some consecrated kings.

The same prefix occurs in some other words that do not necessarily refer to something that is ‘white’:

We hope this article on the commonly used Alb Root Word and it has been helpful to you in remembering the words based on the Root Word Alb and enhance your vocabulary.