The Ambi Root Word has Latin origin which refers to the equivalence between two opposing ideas or forces. For example ambidextrous, is somebody who is able to use the right and left hands equally well, and can be split as follows,

Ambi: Both.
Dexterous: Skill or grace in movement (especially in use of hands).
Ambidextrous: Somebody capable of using both hands with equal proficiency.
The psychological term ambisexual is used for a person who is bisexual or androgynous. This has been extended to mean an indefinite small number in words such as ambiguous (Latin agere, to drive), a matter open to more than one interpretation, or ambivalent (Latin valere, be worth), having mixed feelings or contradictory ideas about something or someone. The sense of being or going around appears in ambient, relating to the surrounding area or environment, and in ambit, the scope, extent, or bounds of something (in both cases from Latin ambire, to go around). 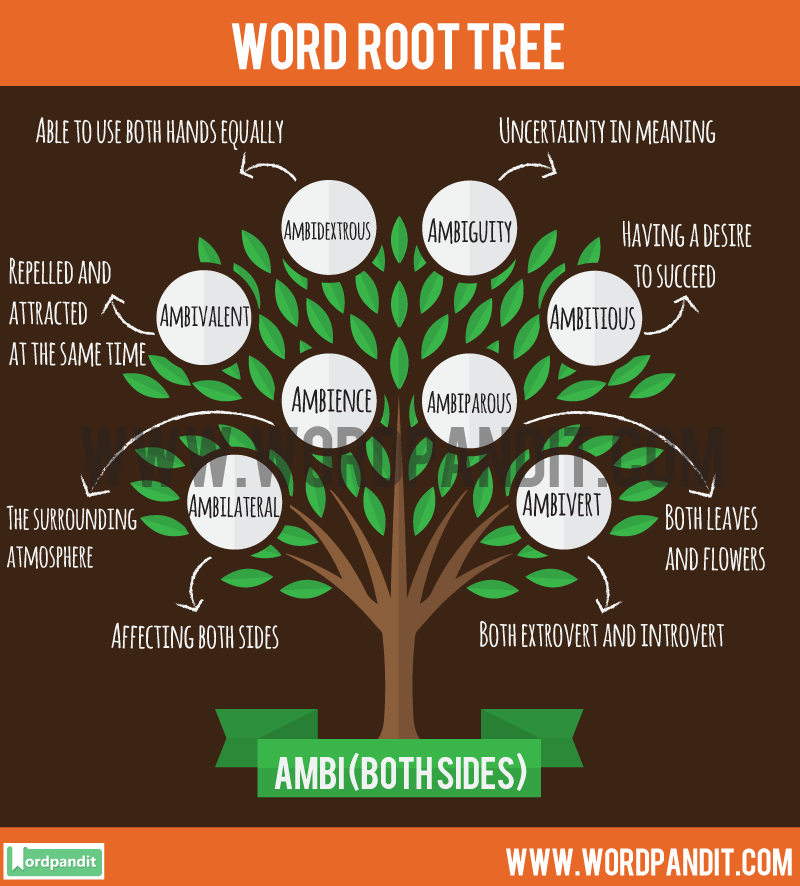 Words Based on the Ambi Root Word

Following is a list of words based on the Ambi Root Word:

1. Ambidextrous: Able to use both hands equally
2. Ambiguity: The quality of uncertainty in meaning; multiple meanings
3. Ambivalent : Repelled and attracted at the same time
4. Ambitious: Having a desire to succeed
5. Ambience: The surrounding atmosphere
6. Ambiparous: Having both leaves and flowers
7. Ambient: Moving around; surrounding on all sides; as, the ambient air
8. Ambivert: A person having characteristics of both extrovert and introvert
9. Ambisexual: Showing, or involving feelings of sexual attraction for both sexes
10. Ambiregnal: Classified into the taxonomic schemes of two different kingdoms of life simultaneously, either as Protozoa and Algae or as Protozoa and Fungi.
11. Ambifix: A string of characters used for both prefix and suffix.
12. Ambigender: Of both male and female genders.
13. Ambigram: A design that may be read as the same word, name or phrase when oriented in two different ways, usually when reflected along a vertical or horizontal axis or when rotated through 180 degrees
14. Ambisense: Used in genetics too describe single-stranded, viral RNA, part of which has a positive sense and part negative.
15. Ambilateral : Affecting both sides of the body, or of an organ.
16. Ambitransitive : Able to be used transitively or intransitively without requiring morphological change.
17. Ambisinister: Awkward or clumsy with both hands.
18. Ambiphilic: Having both electrophilic and nucleophilic character

We hope this article on the commonly used Ambi Root Word and it has been helpful to you in remembering the words based on the Root Word Ambi and enhance your vocabulary.