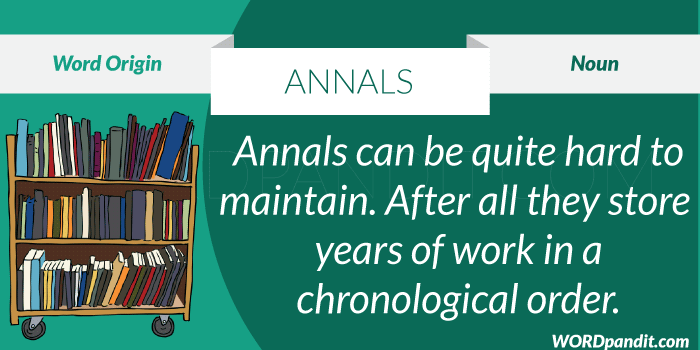 Annals can be quite hard to maintain. After all,they store years of work in a chronological order.
Annals are nothing else but records of historical events. Yes, this is what this obscure sounding word actually means!

In fact, writers of annals can be called annalists.

It’s first usage dates back to 1542 and it has originated from a Latin word annals, which has originated from a plural of annalis meaning ‘yearly’. Annalists is the name given to a class of writers on Roman history, the period of whose literary activity lasted from the time of the Second Punic War to that of Sulla.

The effective root for this word is ‘ann-, anni-, annu-‘, meaning year/yearly. Some other words based on the same root are:
Annual: Yearly, occurring every year or once a year
Anno Domini, A.D.: In the year of the Lord [Jesus Christ].
Biannual: Happening twice each year; semiannual. Our super tip to learn Annals

Annals are nothing else but ‘CHANNELS’ to maintain records of events. Learn the word from this easy to remember rhyme.

1) The annals of Indian civil wars have only prejudice as the main reason. (Noun)
2) The university runs a publication called ‘Annals of time’. (Noun)
3) Annalists penned down the annals of Indian kings who were forced to exile. (Noun)