What does the word root ‘anti’ mean?

You must have heard a lot of words based on this anti root word. Say, you pop in an antibiotic when you have any infection and as the name suggests its kills the bacteria which are causing the infection and that it is against them. So, we can easily remember that the root word ‘anti’ means oppose to something/ against someone or something /act to prevent something.

The best thing about learning through roots is that there might be easy or difficult words from the same root word and you can learn all of them together through this method. So, if you come across the word Anti-Semitism you would be able to understand that it’s against something, which is a very important part of the meaning of the word as it means being against or being hostile towards Jews.

Let us take one example for this. Let’s say word is ‘antipathy’

‘Antipathy’ breaks down into:

Anti : opposed to
Pathos : a quality that causes people to feel sympathy
Anti + pathy= a strong feeling of dislike which is opposite to sympathy. 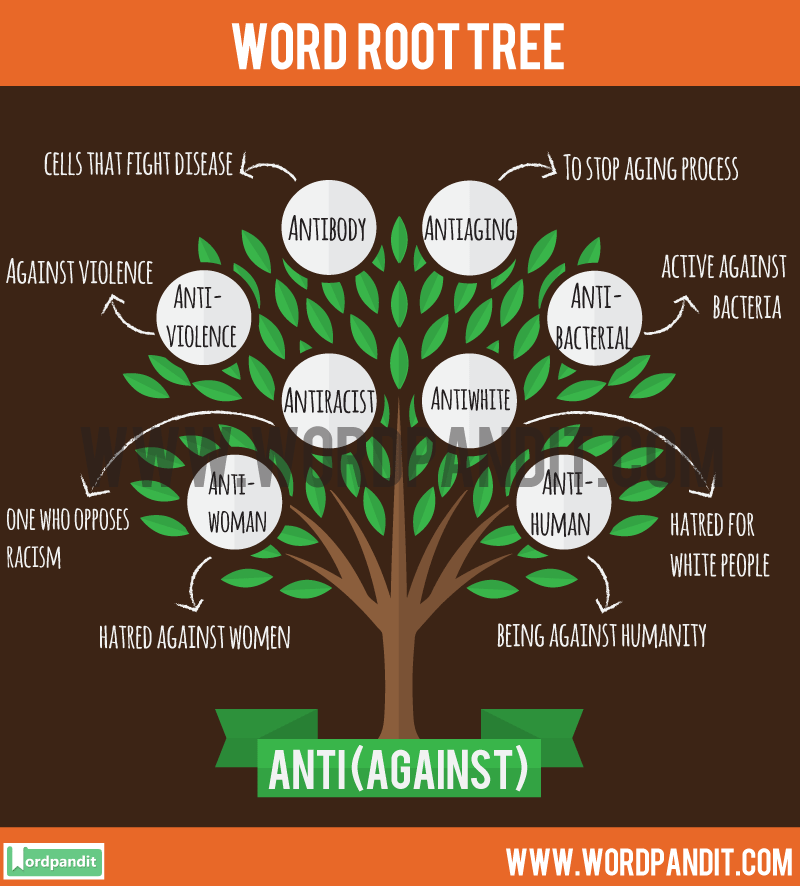 Words Based on the Anti Root Word

1. Antithesis: The exact opposite of someone or something
2. Antibiotic : Tending to prevent, inhibit, or destroy life
3. Anticlimax : An event, period, or outcome that is strikingly less important or dramatic than expected
4. Antidote : Something that corrects or improves the bad effect of something.
5. Antisocial : Violent or harmful to people
6. Antihero : A protagonist or a notable figure who is conspicuously lacking in heroic qualities
7. Anti- inflammatory : Counteracting inflammation
8. Antibody : A substance produced by the body to fight disease
9. Antiviolence : Against or opposed to violence
10. Antiaging : To stop or oppose the aging process
11. Antibacterial : Active against bacteria
12. Antihuman: Acting or being against humanity
13. Antidandruff : One that stops growth of dandruff.
14. Antiamerican : One who hates american.
15. Antishock : One that can prevent shock
16. Antialiasing : A software technique to remove jaggies in order to make signal smoother.
17. Antioxidant : A substance that inhibits oxidation
18. Antiurban : One who opposes urban traditions and culture
19. Antiracist : One who opposes beliefs pertaining to racism
20. Antiwhite : Hatred for white people
21. Antiwoman : Hatred against women

An easy root like the Anti root word can help you remember a few difficult words. Also, whenever you will come across a word that is formed from the same root word Anti, you will be able to understand the word in context.