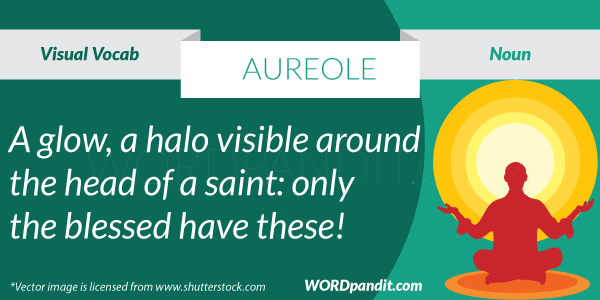 This is word that comes from astronomy into conventional usage. In astronomy, an aureole is ‘a faintly colored luminous ring appearing to surround a celestial body visible through a haze or thin cloud, especially such a ring around the moon or sun, caused by diffraction of light from suspended matter in the intervening medium’. Basically, in simple terms it is ring that covers the sun or the moon.

What happens when this ring is applied to a human being? We get figures like in the word poster above. The Buddha is sitting with a disk shaped halo (a glow) around his head. This circle of light enveloping the head of a holy person is called an aureole.

Masters Tip to remember Aureole:
Just associate the picture of a saint with his radiant glow around his head with aureole.

Usage Examples for Aureole:
1. A glow of life seemed like an aureole to shine about her. -Of Human Bondage by W. Somerset Maugham
2. The convict’s shirt, open in large, broad folds, left bare the neck, delicate as a woman’s, and made for that youthful face an aureole, of innocence, of martyrdom. –The Guardian by Walter Horatio Pater