An unyielding gloom settled upon me a few years ago when I came across a word which originates from the root word blasto. There was no social networking then, so, apart from the telephone, there was no way of keeping in touch with old friends. Ten years after leaving primary school I was taken aback when I heard about the demise of a friend, who I used to look at scornfully, due to blastoma. Blastoma – a type of cancer, more common in children, that is caused by malignancies in precursor cells, often called blasts.
The root word blasto comes from the Greek word blastos, a bud or a sprout metaphoric of a cell or an immature child. The word root blasto has been used abundantly in the medical domain. The various words that spring out from this root depict the function of the cells, their location, and their stage of development or the organ which develops from them. Blastocyte, for example, is an undifferentiated embryonic cell. The tumor which comprises of these immature undifferentiated cells is called blastocytoma. A cell from which connective tissue develops is called fibroblast. Blastula is an animal cell in its early form of development. 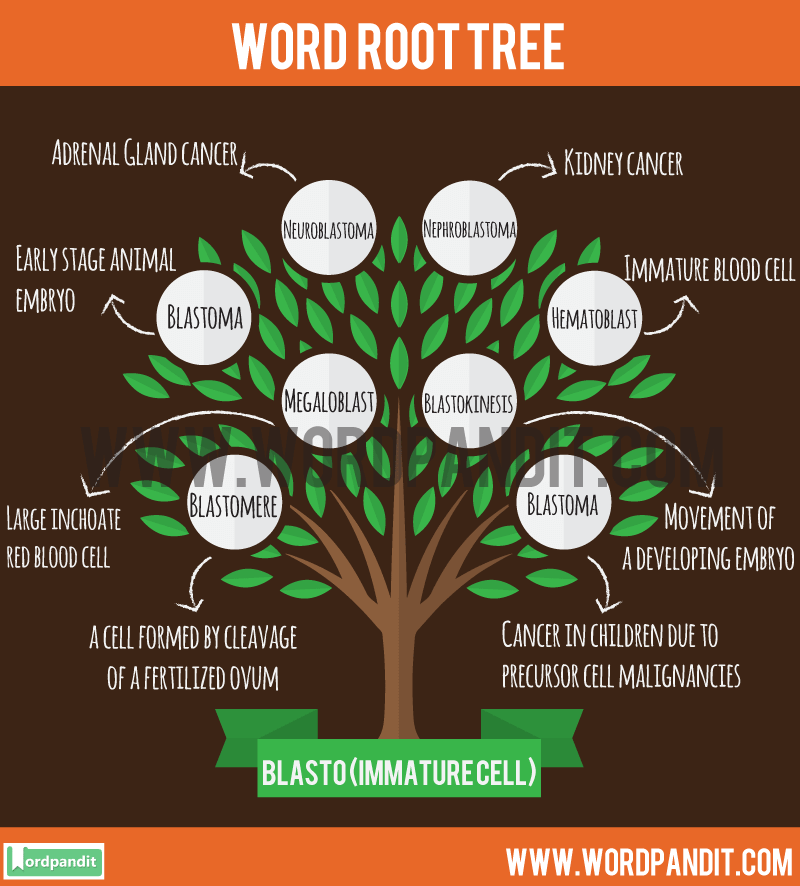 Words Based on the Blasto Root Word

Following is a list of words based on the Blasto Root Word:

1. Blastula: An animal embryo at the early stage of development when it is a hollow ball of cells
2. Blastoderm : A blastula having the form of a disc of cells on top of the yolk
3. Blastomere: Any cell resulting from cleavage of a fertilized egg.
4. Blastema: A mass of undifferentiated cells from which an organ or body part develops.
5. Blastematic: Of or relating to masses of living substance capable of growth and differentiation.
6. Blastocyst: The early metazoan embryo of placental mammals typically having hollow fluid filled rounded cavity bounded by a single layer of cells.
7. Blastocytoma: A tumour composed of immature undifferentiated cells.
8. Blastoderm: A blastula having the form of a disc of cells on top of the yolk.
9. Blastodisc: The embryo forming portion of an egg.
10. Blastodermic: The layer of cells that develops on the surface of the yolk in an avian or reptilian egg and gives rise to the germinal disk from which the embryo develops
11. Blastogenesis: The development of an embryo during cleavage and germ layer formation.
12. Blastogenesis: The transformation of small lymphocytes into larger cells that are capable of undergoing mitosis
13. Blastokinesis: Movement of the developing embryo in some insect eggs into the yolk mass
14. Blastomatosis: The formation of blastomas or tumor formation
15. Blastomycosis: A fungal infection causing lesions on the lungs, skin, or mucous membranes.
16. Diploblast: Layers of body tissues: The diploblasts consist of animals; such as, jellyfish and hydra
17. Ectoblast: The outer layer of the blastoderm.
18. Neuroblastoma: A malignant tumour composed of neuroblasts, most commonly in the adrenal gland.
19. Nephroblastoma: Cancer of the kidneys that typically occurs in children.
20. Fibroblast: A cell in connective tissue which produces collagen and other fibres.
21. Hematoblast: An immature blood cell.
22. Megaloblastic anaemia: Anaemia that results from inhibition of DNA synthesis during red blood cell production.
23. Holoblastic: Characterized by complete cleavage that divides the whole egg into distinct and separate blastomeres.
24. Meroblastic: Characterized by incomplete cleavage as a result of the presence of a hindering mass of yolk material.

We hope this article on the commonly used Blasto Root Word has been helpful to you in remembering the words based on the Root Word Blasto and has enhanced your vocabulary.