After the full-stop a quote will unfurl and the word root brachi will have its roots deeply embedded into your memory.“Embrace the glorious mess that you are” remarked by Elizabeth Gilbert, author of the best-selling 2006 memoir “Eat, Pray, Love”. A profound thought stated directly and clearly enough not to leave any room for misinterpretation. To embrace is to hold tightly in one’s arms. The word root brachi comes from Greek meaning “arm” or more specifically the upper arm from shoulder to the elbow.A Bracelet is a piece of jewelry that is worn around the wrist or arm. The swinging motion exhibited by monkeys from branch to branch is called Brachiathon. 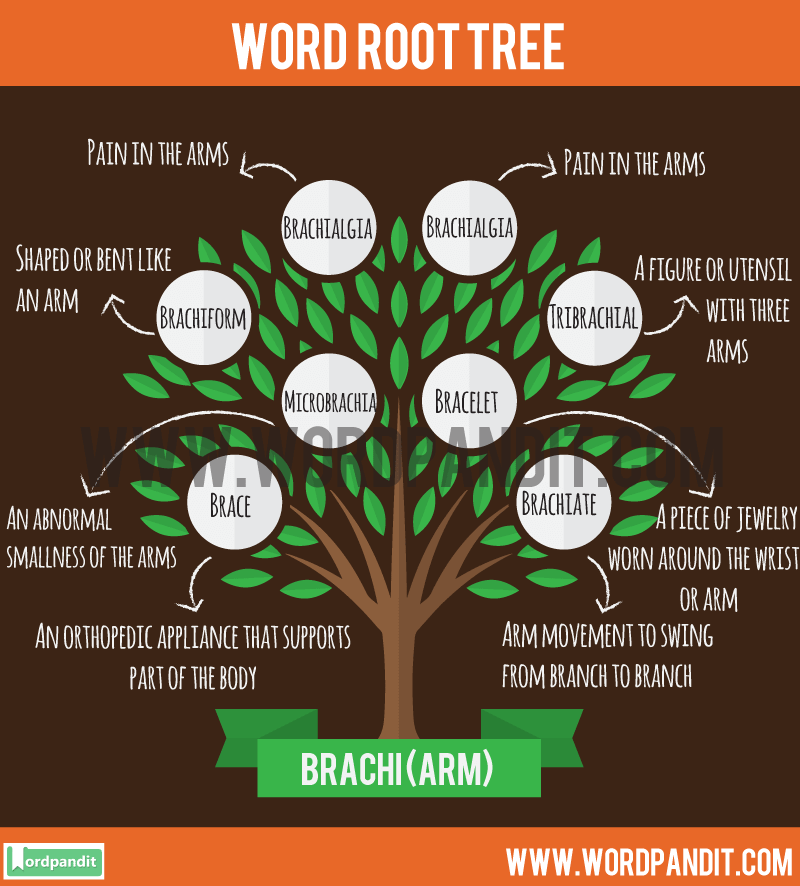 Words Based on the Brachi Root Word

Following is a list of words based on the Brachi Root Word:

1. Abrachia: Congenital disease of not having limbs.
2. Abrachiocephalus: A fetus exhibiting the absence of the head and arms.
3. Brace: An orthopedic appliance that holds or supports part of the body.
4. Bracelet: A piece of jewelry worn around the wrist or arm.
5. Brachialgia: Pain in the arms.
6. Brachiation: A mode of locomotion, characteristic of some arboreal animals, in which the animals swing from one handhold to the next.
7. Brachiform: Shaped or bent like an arm.
8. Brachiocephalic: A reference to arm and head.
9. Brachiocrural: A reference to arm and leg.
10. Brachiocytosis: A crookedness of arm.
11. Brachiogram: A tracing of brachial (arm) artery pulse.
12. Brachioradialis: A muscle lying on the lateral side of the forearm.
13. Brachiate: move by using the arms to swing from branch to branch.
14.Brachioplasty: A surgical procedure called Arm Lift to reshape and provide improved contour to the upper arms and connecting area of chest wall.
15. Microbrachia: An abnormal smallness of the arms.
16. Monobrachia: A fetus with only one forelimb.
17. Tribrachial: A figure or utensil with three arms.

We hope this article on the commonly used Brachi Root Word and it has been helpful to you in remembering the words based on the Root Word Brachi and enhance your vocabulary.