If wit is a sword meant to make people feel the point as well as see it, what is the soul of wit? Shakespeare claimed brevity, born out of the word root brev, to be the soul of wit. Brevity, the concise use of words in writing or speech, also represents shortness of time. The word root brev comes from Latin “brevi” meaning “short”. Brevicollis is the shortness of the neck. Brevifoliate, in botany, is to have short leaves. Perceptive towards the brevity of human life Friedrich Nietzsche rightly said, “It is my ambition to say in ten sentences what others say in a whole book.” 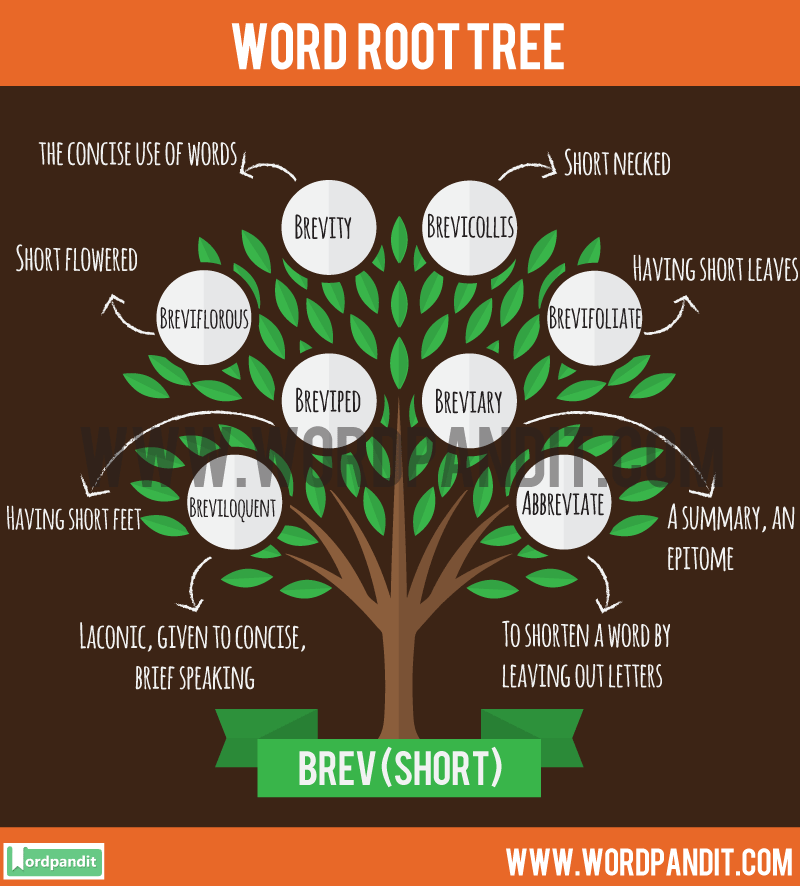 Words Based on the Brev Root Word

Following is a list of words based on the Brev Root Word:

1. Brevity: The concise use of words in writing or speech
2. Abbreviate: To shorten a word by leaving out some of its letters or sounds.
3. Brevet: To be promoted in rank or a position without a pay increase.
4. Brevicaudate: Short tailed.
5. Brevicollis: Short necked.
6. Breviflorous: Short flowered.
7. Brevifoliate: Having short leaves.
8. Brevilineal: Having a body that is shorter and broader than usual.
9. Breviloquent: Laconic, given to concise, brief speaking.
10. Breviped: Having short feet.
11. Brevipennate: A short winged bird.
12. Breviary: A summary, an epitome.
13. Brevilingual: Short sounds.
14. Brevirostrate: Bird with a short beak.

Is the antonym of breviloquent loquacious?
You abbreviate a word or a phrase when you have too much to speak of but you use etc., which is an abbreviation, when you have too less.
We hope this article on the commonly used Brev Root Word and it has been helpful to you in remembering the words based on the Root Word Brev and enhance your vocabulary.