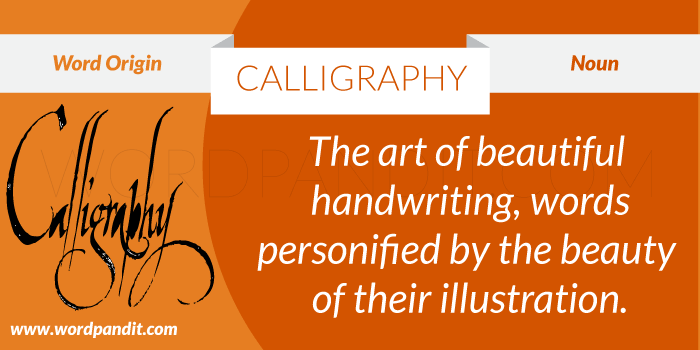 The word calligraphy literally means beautiful writing. It is derived from a combination of Greek Roots: ‘Calli’ meaning ‘beautiful’ and ‘grapho/graph/graphy’ meaning ‘to write to record’.

In fact, with the root ‘grapho-, graph-, -graph, -graphy’ we find a number of words which we use in our everyday lives. For example, have a look at the following list:

You may have realized that each of the words above has a relationship to writing. Our super tip to learn Calligraphy

1. However, Patrick’s skill in calligraphy far exceeds his skill in any other field. It is almost as if his hands have the divine gift of beauty in them.
2. As the American revolutionaries found, petitions to the Crown, absent firearms and men willing to use them against the mightiest military power then existing, are simply exercises in calligraphy. – The Volokh Conspiracy » “Obama Effect” Spurs Record Number of Nobel Peace Prize Nominations