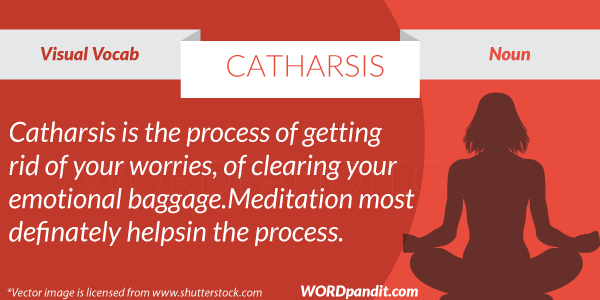 Catharsis is a technique in psychology, which is defined as “A technique used to relieve tension and anxiety by bringing repressed feelings and fears to consciousness”. Basically what it does is act as a release for all the tensions in one’s life, the same thing that can be achieved through meditation.

Catharsis carries the following dictionary definitions:
1. Medicine: Purgation, especially for the digestive system.
2. A purifying or figurative cleansing of the emotions, especially pity and fear, described by Aristotle as an effect of tragic drama on its audience.
3. A release of emotional tension, as after an overwhelming experience, that restores or refreshes the spirit.

Usage examples for Catharsis:
1. A catharsis of emotions is an absolute, else it leads to a situation where a person is stifled and can sink into depression.
2. Society has its forms of catharsis, with protests and revolutions being symbols of stress created by inefficient governments.