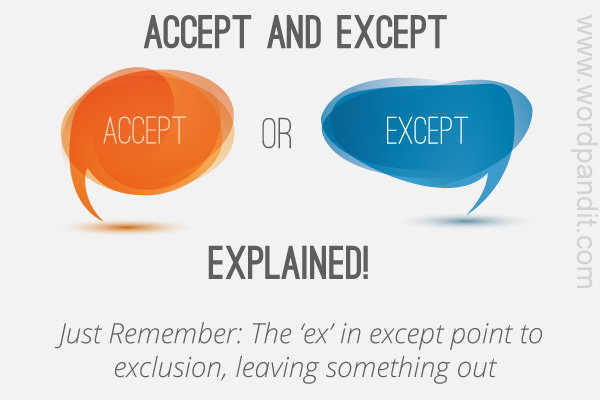 The only thing common about these words is their pronunciation. With vastly different meanings and grammatical functions, these two words can be and should be easily distinguished.

Accept is verb that means “to receive, admit, regard as true, say yes.” For example: I accept his proposal.

Except, on the other hand, can be used as a preposition, conjunction and rarely as a verb. Except, as a preposition, means “excluding”
For example: Donald brought gifts for everyone except me.
As a conjunction, except means “other than”.
For example: I would like to be present at your wedding, except I have a surgery to attend to on the same date.
Except, (used uncommonly) as a verb, means “exclude”.
As a verb, except means almost the opposite of except.

Just Remember: The ‘ex’ in except point to exclusion, leaving something out.

Examples of incorrect uses of Accept and Except:

1. He refused to except the new ideas.
2. he is not allowed to see the public accept his family.

Examples of correct uses of Accept and Except:

1. The investor has no choice but to accept the loss.
2. All were present their except him.

This is another pair like the one above: two words similar in sound but vastly different in meaning and spelling. Accept means “to grant, to receive, to submit to, to answer yes, to agree to be a member or to take a position”. For example: The girl accepted the boy’s proposal.
Except as a verb means “to take out, to leave out, to take exception to”. For example: He would have been acceptable to us a groom except for his stupid moustache, that rules him out.