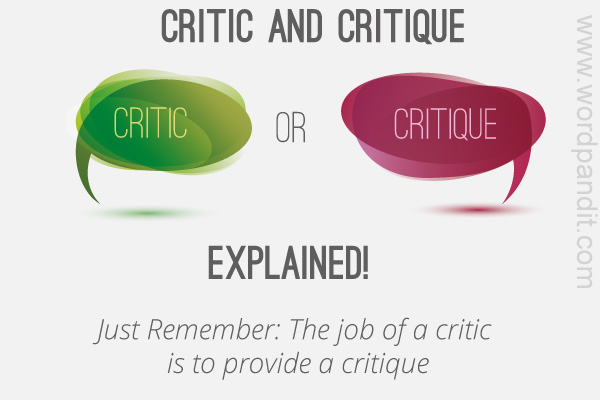 Well, what is the job of a critic? To provide a critique!
A critic is a person, a critique is piece of work. A critique is an in-depth evaluation of a subject, examining it from all critical angles.

Always remember the critical nature of these words; important you do not make a critical mistake while deciding which one of the above two to use.

Word Origin:
The word critic comes from Greek kritikós, “able to discern”, which is a Greek derivation from the word krités, meaning a person who offers reasoned judgment or analysis, value judgment, interpretation, or observation.-Wikipedia

Just Remember: The job of a critic is to provide a critique.

Examples of incorrect uses of Critic and Critique:

1. Both critique and subject resist identification on the sole basis of gender.
2. Pointing out all of the physics problems is a critique with the longest possible beards.

Examples of correct uses of Critic and Critique:

1. He found that there wasn’t enough meat on the bones for this critic.
2. He was trained efficiently to evaluate and critique texts.

A critic is someone who forms and expresses judgments of the merits, faults, value, or truth of a matter: “He is his own worst critic when it comes to analyzing his writing.”

A critique is an evaluation by using a review or commentary, especially one dealing with works of art or literature: “The critique of the new film in Times of India was very positive.”

2. A crucial or decisive discussion of a specified topic: “During the course of the dinner, they engaged in a wide ranging critique of the new policies at the university.”
The critique of the concert appeared in the paper this morning under the by line of the famous critic whose face in the picture at the top of the column was always obscured.