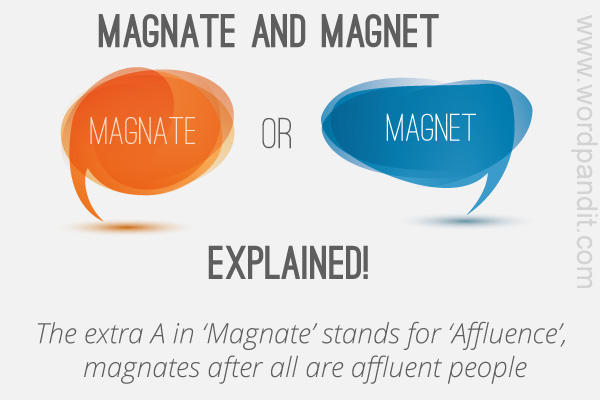 Magnate is a word that comes to from Latin. Magnate, derived from from the Late Latin magnas, refers to a great man. ‘Magnus’ in itself implies ‘great’, with the word designating a noble or other man in high social position. This term was applied to the Turkish Parliament, the Főrendiház or House of Magnates. We all know what a magnet is, don’t we? We have played with plenty of them in our childhood. The word magnet comes from Greek, and refers to a stone or object that produces a magnetic field.

Tool tip to remember the difference

Just Remember: The extra A in ‘Magnate’ stands for ‘Affluence’, magnates after all are affluent people.

Examples of incorrect uses of Magnate and Magnet:

1. The pizza magnet had a pretty good evening.
2. The refrigerator magnate was ready for use.

Examples of correct uses of Magnate and Magnet:

1. He is a real-estate magnate.
2. Moving a magnet creates an electric current.

Magnate is an individual having power, rank, and influence; often in a specific area of expertise: “Ratan Tata has become a magnate in the automobile industry after manufacturing world’s cheapest road car called “Nano’.”
Magnet , on the other hand, has the following meanings:-
1. A piece of iron or steel which produces an attracting power which draws smaller pieces of iron, steel, etc. to it: “The high speed trains in Japan use the power of magnets to run on the rails.”
2. That which attracts: “Hill stations are a magnet for tourism during summers in India.”