Tack vs Tact – Confused between Tack or Tact? 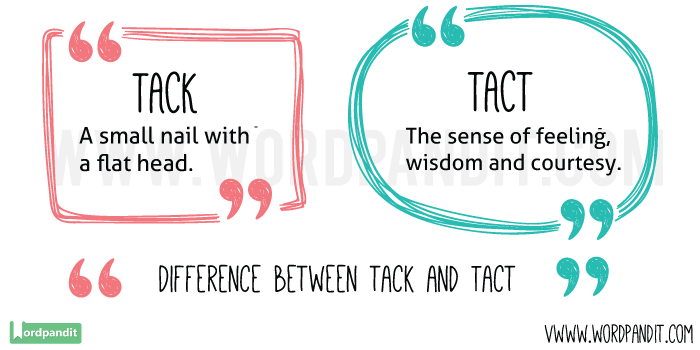 Word 1: Tact (TAKT)
Meaning 1: The ability to handle embarrassing situations carefully without offending others.
Example Sentence: The success of the peace conference depends a great deal on the tact of the political leaders on both sides.

Meaning 2: The ability to appreciate the delicacy of a situation and to handle it with dexterity.
Example Sentence: My uncle used tact in dealing with the tragedy that hit their family.

Word 2: Tack (TAK)
Meaning 1: A small sharp nail with a flat head.
Example Sentence: On Diwali, I used a tack to hang the chandelier outside my front door.

Example Sentence using both words:
My father used tact to calm down my anger, when my little brother unintentionally crashed against the stool where I was standing to tack the calendar up.