Tacks vs Tax – Confused between Tacks or Tax?

Tacks vs Tax – Confused between Tacks or Tax? 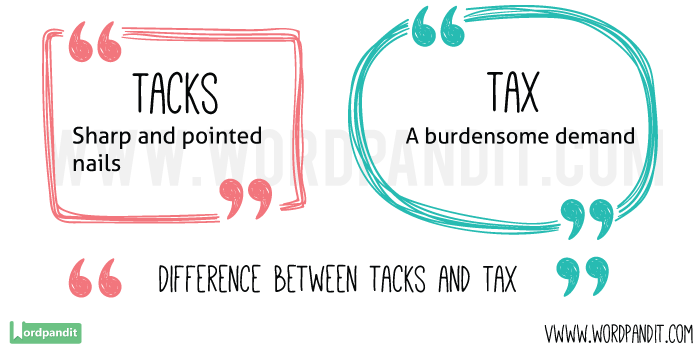 Word 1: Tax (TAKS)
Meaning 1: To make difficult or inappropriate demands.
Example Sentence: My younger brother taxed my father when he was stressed, annoying him more than he already was.

Meaning 2: An amount of money government requires people to pay according to income, value of property etc. which is used for the functioning of the government.
Example Sentence: Goods and Services Tax is the indirect tax throughout India to remove tax barriers between states and create a single market.

Meaning 3: To charge the collection of a specified amount of money on a regular basis for the use of ownership of something; a rent.
Example Sentence:The residential society where I used to live taxed each household for the amount of water that was being used.

Meaning 4: To put difficult demands on someone.
Example Sentence: The internship is going to tax all my strength, but I have to do it if I want to excel.

Word 2: Tacks (TAKS)
Meaning 1: To change the direction of a sailing ship.
Example Sentence: The boatman tacked east against the wind and current, and was barely moving forward.

Meaning 2: To fasten something to a surface using a sharp, pointed nail.
Example Sentence: I stood up on the chair to tack the new calendar I got as a gift from my friends.

Meaning 3: Short, sharp pointed pins used to attach items to a surface.
Example Sentence: I bought a new packet of colorful tacks to use on the bulletin board.

Example Sentence using both words:
The new boy in the school really taxed my patience when he pushed me while I was tacking the lost and found notice on the bulletin board at my school.