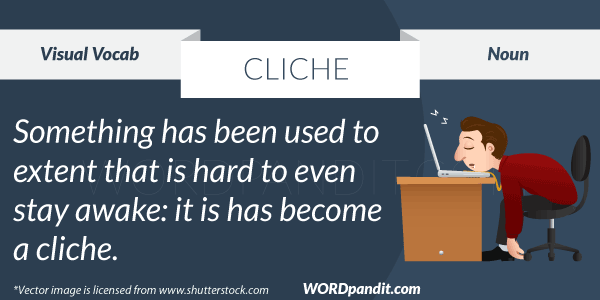 Clichés are all around us. Try as hard as possible but you won’t be able to miss them. What are clichés? These are statements, remarks, events, habits etc. that have become so common that it is almost next to impossible to hear them; they have the potential to generate immense boredom. In a way, using the word cliché has become a cliché in itself.

Do you use any clichés in speech or writing? In case you do, you can post them here as a comment.

Cliché sounds similar to the most commonly used term ‘click’. Since we click so much while using our laptops and PC’s that the clicking thing becomes meaningless and non-interesting, so is the meaning of Cliché. Effectively, we almost click non-stop these days, and for most of us, this clicking can be quite boring.

We know that the above explanation is a little childish, but acting like a child can be the most effective way to learn. So, use the above example to embed the word in your memory.

1. A phrase or opinion that is overused and betrays a lack of original thought
2. Printing, chiefly British a stereotype or electrotype.

1. She trotted out the old cliché that ‘a trouble shared is a trouble halved’.
2. A clichéd view about the poverty stricken has rendered their life more miserable than ever.