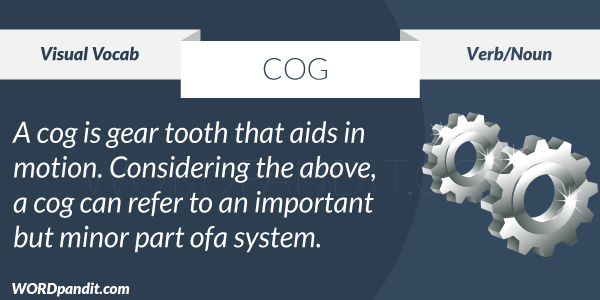 Cog, as shown in the picture, means a series of teeth in a gear that drives it forward. Left by itself. The single teeth is not of much value when compiled in gear form, every cog becomes important. It is from this reference that cog derives its meaning: A subordinate member of an organization who performs necessary but usually minor or routine functions.

Cog carries the following dictionary definitions:
1. One of a series of teeth, as on the rim of a wheel or gear, whose engagement transmits successive motive force to a corresponding wheel or gear.
2. A cogwheel.
3. A subordinate member of an organization who performs necessary but usually minor or routine functions.

2nd meaning for Cog:
A meaning of Cog that differs from above is as follows:
1. To cheat, especially at dice. (verb)
2. An instance of cheating; a swindle. (noun)

Do not forget this meaning.

Idioms based on cog:
There are a couple of interesting idioms based on the word cog:
1. Slip a cog: To make a blunder; err
One of the waiters must have slipped a cog.
2.  A cog in the wheel/machine: one part of a large system or organization.
He was just a small cog in the large wheel of organised crime.