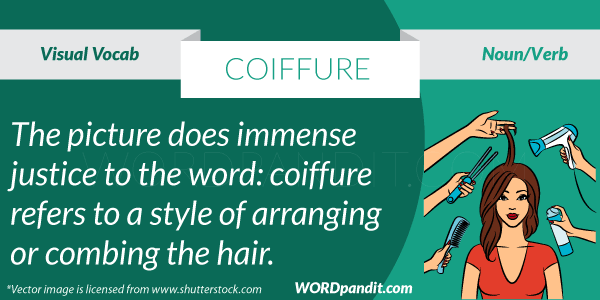 Coiffure is nothing else but an arrangement of hair, usually the task and job of hairdressers. They can make some pretty attractive ones. And trust me, if your hairdresser has had a bad day, he make you and your coiffure look like a total disaster.

Coiffure carries the following dictionary definitions:
1. A style of arranging or combing the hair. (noun)
2. Ahead covering; headdress. (noun)
3. To provide with a coiffure. (verb)

Different hair styles that one should know:
There are a number of things that one can do with one’s hair. Some of these are as follows:

Rat – a pad (usually made of hair) worn as part of a woman’s coiffure
Beehive – a hairdo resembling a beehive
Bouffant – a woman’s hairstyle in which the hair gives a puffy appearance
Lock, ringlet, whorl, curl – a strand or cluster of hair
Afro, Afro hairdo – a rounded thickly curled hairdo
Bang, fringe – a border of hair that is cut short and hangs across the forehead
Bob – a hair style for women and children; a short haircut all around
wave – a hairdo that creates undulations in the hair
Braid, plait, tress, twist – a hairdo formed by braiding or twisting the hair
Chignon – a roll of hair worn at the nape of the neck
Marcel – a hairdo characterized by deep regular waves that are made by a heated curling iron
Pageboy – a smooth hair style with the ends of the hair curled inward
Pompadour – a hair style in which the front hair is swept up from the forehead
Ponytail – a hair style that draws the hair back so that it hangs down in back of the head like a pony’s tail
Roach – a roll of hair brushed back from the forehead
Scalp lock – a long tuft of hair left on top of the shaven head
Thatch – hair resembling thatched roofing material

Usage examples for Coiffure:
1. His ever-changing clothes and coiffure are the things that make him stand out amongst a crowd.
2. Coiffures come in all shapes and sizes: you have to choose one that suits you.