Learn the applications of for the topic through Compound Interest Examples

The first article for compound interest was all about the basics and essentially explained the compount interest formula. In this article, we use compound interest examples in order to understand important concepts and applications related to Compound Interest.

What all do we cover in this compound interest examples article?
We cover:

Step 3: Amount and Interest for the second year
Now the interest charged will be charged on this amount.
Amount at the end of second year is P2 = (P1 –X ){1+r/100}

So we are left with:

where X is the installment and n refers to the number of installments.

Question-1: Richa borrowed a sum of Rs. 4800 from Ankita as a loan. She promised Ankita that she will pay it back in two equal installments.If the rate of Interest be 5% per annum compounded annually, find the amount of each installment.

Let us take an example for this concept.

This completest the section on population growth problems. Hope with the help of above compound interest examples, you have been able to understand how these problems need to be approached.

As we can see from the last case above, it is not necessary that there is always an increase in any quantity or amount. There can also be a reduction in the amount of something. This reduction is called the rate of depreciation, especially in the financial world. In this case, we do nothing else but take the interest rate to be negative. The formula for this is as follows:
Let P be the original amount.
Let P1 be the new amount at the end of t years.
P1 = P (1-R/100)t
Here R is the rate of interest (negative rate).
Always remember, the rate of depreciation is nothing else but negative rate of interest.

Question 1: A builder borrows Rs. 2550 to be paid back with compound in­terest at the rate of 4% per an­num by the end of 2 years in two equal yearly installments. How much will each installment be?

Here we have two equal installments, so 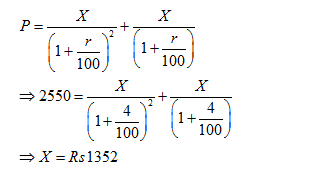 Let principal (present worth) for first year be P1 and that for two years be P2. 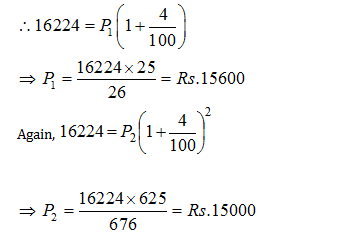 The total payment will be ( cash down payment + installments paid )

Cash value of the scooter 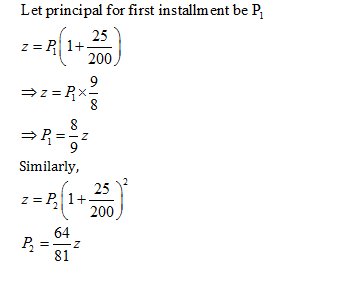 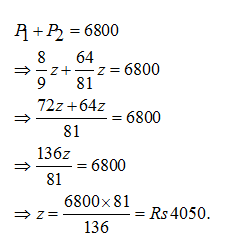 Since the rate growth of population is increasing first and then decreasing for the second year and again it increases for third year, then the population after T years will be