Direction for the question:
Study the following graph and answer questions that follow. The x – axis denotes the years from 1990 to
1998.

Question 4. What is the expectation from the pearl production in year 1999?
(a) go up
(b) go down
(c) remain the same as previous year.
(d) nothing can be said.

Students please note that the values on the Y-axis are not given. But you may observe that none of the Questions require you to have these values. We can very well solve all questions by assigning arbitrary values to them. For the sake of convenience let us start the values from 0 and make an increment to 2 at each grid lines (dotted lines). So the values in the graph can be compiled as given below: 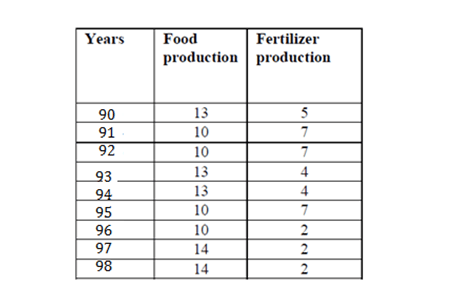 The graph of pearl production shows an alternate increase and decrease in every 1 to 2 years. Hence looking at the trend of the graph in 1997 and 1998, it can be expected that the graph will go down in 1999.

It is clear that the graph for peanut production remains constant for two consecutive years. But it breaks this trend in 1996 as it has a value of 2 instead of 7 in this year.