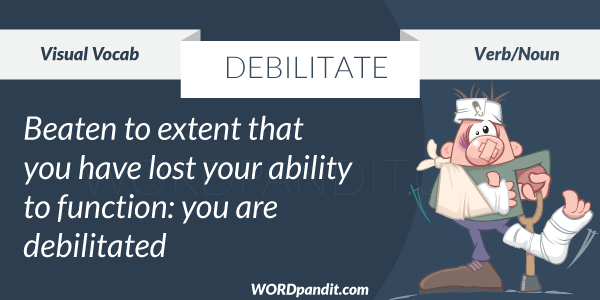 Tip to learn Debilitate:
Just equate Debilitate to: De+ability, that is someone who does not the ability to work, in other words a ‘WEAK PERSON’.

The dictionary definitions for debilitate are as follows:
1. To make weak or take away the strength

PLEASE NOTE:
The following is an extract used for educational purposes:  ‘The BBC has been accused of acting “like a cheerleader for legalising assisted suicide”, which it denies. Pratchett says: “Everybody possessed of a debilitating and incurable illness should be allowed to pick the hour of their death.” Clearly, with him, the dignity of choice is paramount. However, while one has enormous sympathy for Pratchett suffering such a vile disease, the fact remains that he is a rich, powerful man and it is highly unlikely that his wishes would be ignored. With respect, euthanasia laws are not in place to protect people such as him. What of those who may have their “choice” taken away, even if they don’t want to die?’