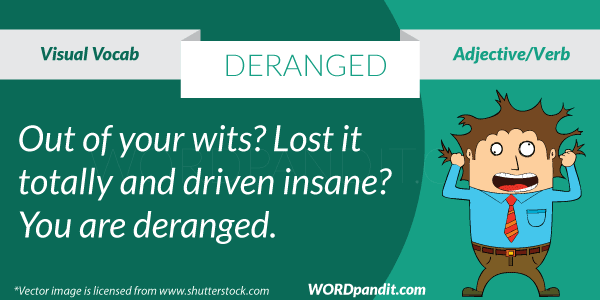 Apt examples of deranged acts are some of the one’s carried out by George Bush. He surely did ensure more than a few decisions went wrong and did so with complete confidence. In the picture above, he is caught up in suit which is generally used to detain deranged individuals that can be dangerous. It ties one’s hands, so that one cannot inflict any damage on oneself or anyone else. If only Bush was tied up like this, the world might have been a different place (though the chances of there being another Bush are higher).

The dictionary definitions for deranged are as follows:
1. Insane (out of one’s senses). (adjective)
2. Disordered; disarranged. (adjective)

Remember the clown from the movie ‘the dark knight’?
Well he surely is one deranged character.

Usage Examples for Deranged:
1. Deranged individuals can cause a lot of damage to their own selves, at times even attempting to kill themselves.
2. His mind had become deranged as a result of his trials and tribulations.