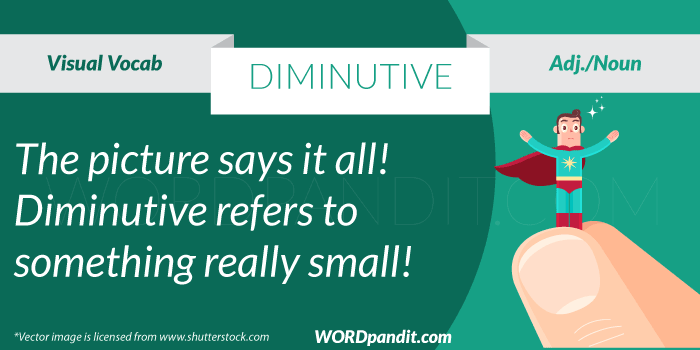 The word diminutive is an adjective. Diminutive is used to denote something that is small, little or tiny. It is also used as a suffix with words to denote smallness like –let in booklet etc.
Its origin can be traced back to 1350-1400 and was originally derived from the Medieval Latin word dīminūtīvus.

1. Small, little, tiny
2. A suffix used after words to denote smallness like –kin in lambkin

The word diminutive contains the word ‘minute’ and is hence pretty easy to relate to as minute also means small or tiny.
Alternatively diminutive can be broken into the word ‘the minutive’ and can be related to something that is pretty minute or small.

1. His diminutive stature meant that no one in the council paid heed to his suggestions.
2. The diminutive plants fell off the side of the wall.
3. The new diminutive hardware of this machine has ensured that it be packed with less computing power than its counterparts.