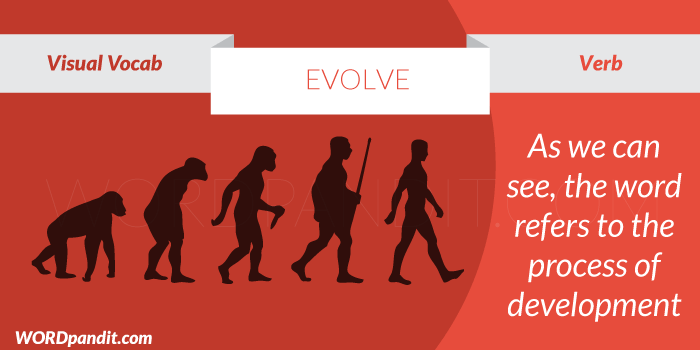 The biological definition for evolve is ‘to develop by a process of evolution to a different adaptive state or condition.’

The picture that comes to mind when one thinks of this word is the human evolution, the one shown in the picture as well. We have evolved, have we not? We have gone from apes to full-blown human beings, with our features developing along the way.

Evolve carries the following dictionary definitions:
1. To develop gradually: to evolve a scheme.
2. To give off or emit, as odors or vapors.

Masters tips for Evolve:
Difference between evolve and devolve
We have seen the meaning of evolve from above. The meaning of devolve, on the other hand, means to grown worse. It is the opposite process of evolve.

Devolve is also used in the sense when there is a change of power and authority from a central power or governing body to that of a more local center: “The corporation decided to devolve the control of sales from the head office to the local authorities.”


Usage examples for Evolve:
1. Many theories of human evolution have developed over a period of time.
2. One’s thoughts evolve as time goes by and the as the wisdom of one’s age is added to one’s thoughts.