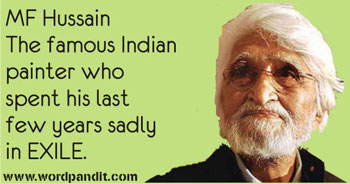 Exile is the condition when one lives away from one’s country. This can be either forced due to certain circumstances or one can impose it on oneself. For example, the famous Indian painter MF Hussain had to spend the last years of his life in exile. This was due to reported obscenity in his paintings and how some Hindu fundamental groups took objection to his painting the Hindu gods and goddesses in nude. The court cases and all the legal battles made him flee the country.

In fact, in this small extract, there are a number of words worth consideration other than exile. The meanings of these words are listed below (kindly try to make sense of them in the given context):

PLEASE NOTE:
The following is an extract from The Hindu used for educational purposes:  ‘It is a blot on our cultural heritage that the father of contemporary art in India, M.F. Husain, passed away in exile, longing for his only love, India, which was in his blood and being. India was to him the Muse, the eternal spring of inspiration and he wandered as the prodigal son adorned with the crowns that we bestowed without the kingdom.’