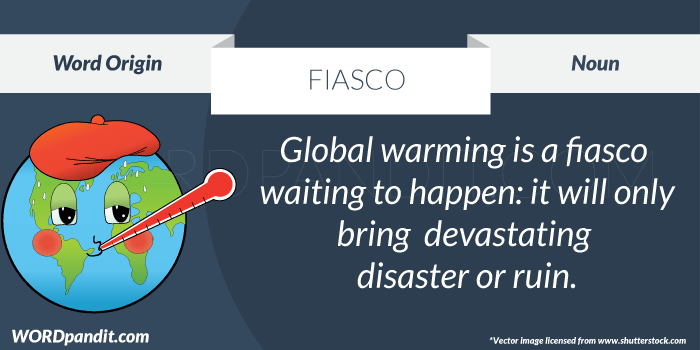 Sometimes, some people are destined to move from one failure to another, not because they can’t do anything right, but due to sheer carelessness that slowly becomes their tendency. And slowly these failures accumulate to form the one grand fiasco that brings everything down, that one disaster or debacle that just could not be avoided.

Its first known usage dates back to 1854. It is a French word that has originated from an Italian word far fiasco, which means to bottle. But how can making a bottle mean failure? How did this come to happen? The Barnhart Dictionary of Etymology offers a tantalizing explanation. It refers to the alleged practice of Venetian glassmakers setting aside imperfect glass to make a common bottle or flask. Basically, this means that the Venetian glassmakers were probably engaged in something much more difficult than a mere wine bottle, but if they made a mistake, they could always convert the error into a fiasco (a flask which was regarded as something inferior to a wine bottle). 1) A complete failure.
2) The biggest debacle.
3) It can also be referred to as a round-bottomed glass flask for wine.

Our super tip to learn Fiasco

Imagine a PSYCHO is after your life. This will be a FIASCO for sure, right?

1) The blast was the biggest fiasco that had happened in the recent times. (Noun)
2) There was one fiasco after another. (Noun)