Something more about ‘Frantic’

What is ‘Frantic’? well, in a way, it is ticking with insanity, one situation where you are constantly on the move and cannot be at rest. That is what frantic is, continuous movement taking you to the point of insanity. We are all surrounded by such individuals, who live like busybodies, involved in frantic movements continuously. Best to avoid these men and women, they might sweep you I their anxiety.

1. Insane
2. A feeling of anxious excitement, passion or fear. 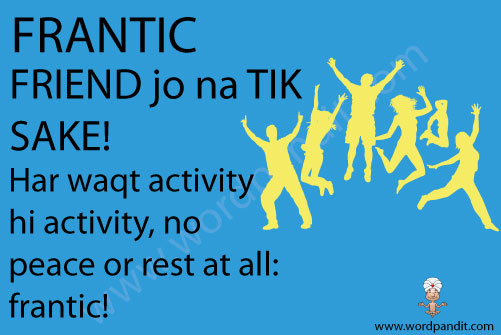 1. He managed to draw a picture with just a few frantic movements of his hand.
2. Peter frantically searched for his passport when he realized he had been pick-pocketed.
3. The frantic crowd went berserk when Pamela appeared with her entourage.