The word genocide is based on two important roots: genos and cide. Genos stands for the basic human gene, the source of all races. And cide stands for killing. Hence, we arrive at the meaning of Genocide: race killing.

Have a look at some cide words: 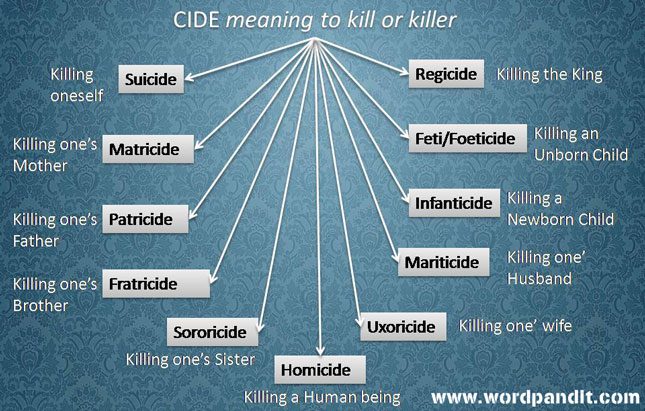 Meanings of the words is provided in the slide only.

The dictionary definitions for Genocide are as follows:
1. The systematic and widespread extermination or attempted extermination of an entire national, racial, religious, or ethnic group. (noun)

PLEASE NOTE:
The following is an extract from The Hindu used for educational purposes:  ‘A massive genocide has been unearthed with the 2011 Indian census. It shows a drop in the numbers of girls per 1,000 boys up to the age of six to 914, from 927 a decade ago. Indiscriminate abortion of female foetuses is the reason for this skewed ratio. Naturally, if abortions were not done, there would be about 952 girls born for every 1000 boys. The exact number of abortions done in India, for obvious reasons, is not known.’
Read further on:
http://www.thehindu.com/opinion/open-page/article2096541.ece