Let’s relate Geo Root Word to this quotation, to understand and remember its meaning:

The Earth does not belong to man.
Man belongs to the Earth.

As it is clear from this quote the earth is extremely valuable for humans, it is the planet on which life thrives. The word root ‘geo’ comes from the Greek word ge- that means ‘Earth’.

For instance, the word geology means study of physical/solid earth, where ‘logy’ is to study. In other words,
• Geo- earth
• Logy- study
• Geo+logy=Study of earth.

An example sentence:
Majority of students failed to pass the ‘geology’. 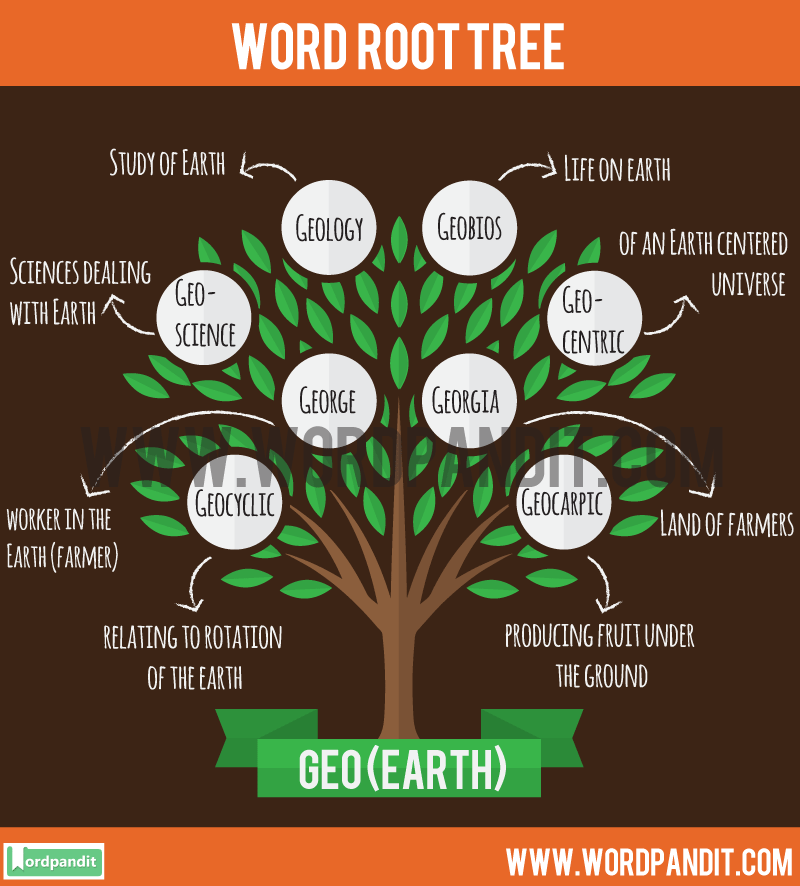 Words Based on the GeoRoot Word

1. Geography: An area of study that deals with the location of countries, cities, rivers, mountains etc.
2. Geometry : A branch of mathematics that measures the features of Earth
3. Geocentric: Of an “Earth” centered universe.
4. George: Greek word for farmer or worker in the Earth
5. Geometer: A specialist in geometry
6. Geoeconomics: Combination of economic and geographic factors relating to international trade
7. Geotropic: Directional growth of an organism in response to gravity
8. Geothermal: Relating to natural heat produced inside the “Earth”
9. GeoScience: Sciences dealing with the “Earth”
10. Georgia: Land of farmers
11. Geochemistry: A science that deals with chemical composition of and chemical changes in the earth’s crust
12. Geochronology: The chronology of the past as indicated by the geological data
13. Geobotany: The branch of botany that deals with the geographical distribution of plants
14. Geosynchronous: Being or having an orbit around the earth with a period equal to one sidereal day
15. Geodesy: Concern with measurements of size and position of earth
16. Geodynamics: Study of forces and pressures within the earth
17. Geocyclic: Relating to rotation of the earth.
18. Geocarpic: Producing fruit under the ground
19. Geobios: Life on earth
We hope that whenever you will come across this Geo root wordyou will be able to decode the meaning of the given words. Any word which uses the Root Word Geo will definitely be related to the word ‘earth’.