Congratulations - you have completed Geometry and Mensuration: Test 14. You scored %%SCORE%% out of %%TOTAL%%. You correct answer percentage: %%PERCENTAGE%% . Your performance has been rated as %%RATING%%
Your answers are highlighted below.
The difference between the exterior and interior angles at a vertex of a regular polygon is 150o. The number of sides of the polygon is
Question 1 Explanation:

The length of the diagonal BD of the parallelogram ABCD is 18 cm. If P and Q are the centroid of the ΔABC and ΔADC respectively then the length of the line segment PQ is
Question 2 Explanation: 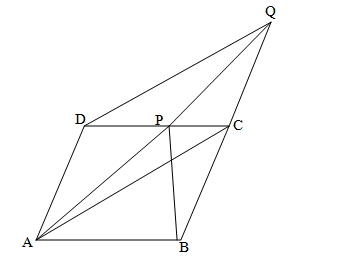 We know that: Triangles ΔAPC and ΔBCP have the common base PC.
Also, the two triangles ΔAPC and ΔBCP are located between the same two parallel lines: AB and PC
Thus, we can say: AD||CQ and AD=CQ……………………….i
From the above, we can conclude ADQC is a parallelogram.
Also, triangles ΔADC and ΔDAQ have the common base: AD
Also, the two triangles ΔADC and ΔDAQ are located between the same two parallel lines: AD and CQ.
Thus, we can conclude: Area of Δ( ADC)= Area of Δ( ADQ)
Let’s subtract area of ( DADP) from both sides: area of Δ( APC)= area of Δ( DPQ)……..(ii)
From (i) and (ii), we can conclude: area of Δ( BPC) = area of Δ( DPQ)
ABCD is a rhombus. A straight line through C cuts AD produced at P and AB produced at Q. if DP= ½ AB, Then the ratio of the lengths of BQ and AB is
Question 4 Explanation: 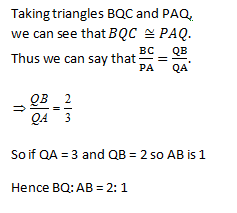 In a quadrilateral ABCD, with unequal sides if the diagonals AC and BD intersect at right angles, then
Question 5 Explanation: