Question 1: Who among the following has been elected as Nepal’s new prime minister?

Montenegro has formally become the member of NATO. The head Headquarters of NATO are in Brussels, Belgium. Full form: North Atlantic Treaty Organization.

Cadila Healthcare Ltd overtook Lupin Ltd to become India’s second most-valuable drugmaker. With a market capitalization of Rs 55,000.57 crore, Cadila is now behind only Sun Pharmaceutical Industries Ltd, which remains the most valuable Indian drug firm with a market capital of Rs1.23 trillion.

The six-member Monetary Policy Committee of the Reserve Bank of India, headed by Governor Urjit Patel on June 7 kept the repo rate unchanged at 6.25%.

Question 5: Merger between Aadhar Housing Finance and which other company has been approved by NHB?

Question 6: India and Spain have signed 7 agreements in what is the first visit by an Indian PM in how many years?

India and Spain today signed seven agreements, including on cyber security and technical cooperation in civil aviation, during Prime Minister Narendra Modi’s visit to the European country. The last Prime Minister to visit Spain was Rajiv Gandhi 30 years ago in 1988.

Question 7: Which country to host 2017 board of governors meeting of Asian Infrastructure Investment Bank (AIIB)?

The second meeting is scheduled to be held for three days from June 16 in South Korea’s southern resort island of Jeju. This is the first the first time that the AIIB’s annual meeting is held outside China. The aim of AIIB is to promote economic development of the region by supporting major infrastructure projects.

Question 8: Archaeologists have found the remains of the Fugan Temple in which country?

Almost 1,000 years after it was lost, archaeologists have discovered a temple hidden in downtown Chengdu, China. The Fugan temple lasted from the Eastern Jin Dynasty (317-420) to the Southern Song Dynasty (1127-1279).

Question 9: Six countries of the Arab region have broken off diplomatic ties with which country?

Saudi Arabia, the United Arab Emirates, Egypt, Bahrain, Yemen and the Maldives say they are severing diplomatic relations with Qatar.The countries said they would halt all land, air and sea traffic with Qatar, eject its diplomats and order Qatari citizens to leave the Gulf states within 14 days.

Question 10: In which quarter of FY 2016-2017 did India lose its fastest growing major economy tag?

India’s gross domestic product data has slumped to its lowest in more than two years in the March quarter, stripping the country of its status as the world’s fastest growing major economy. Annual economic growth at 6.1 percent in the January-March period was even lower than the lowest analyst estimate of 6.5 percent in a Reuters poll. Overall, the median forecast of 36 analysts was for a year-on-year growth of 7.1 percent. 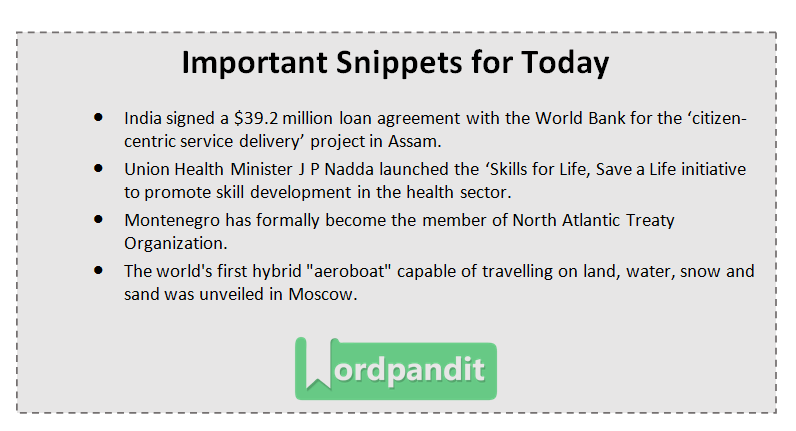