As per recently released Public Affairs Index (PAI) 2017, Kerala has been declared as the State with the best governance in the country for a second straight year.

Question 2: Which among the following is India longest river bridge?

The bridge is situated over the Brahmaputra river at an aerial distance of around 100 km from the Chinese border. It is 9.15 km long.

Question 3: Which state government is going to form ‘Maa’ committees?

The Uttar Pradesh government has decided to form ‘Maa’ committees to keep an eye on mid-day meals served to students in state-run primary schools.

Amul will sponsor the New Zealand cricket team for the upcoming Champions Trophy in England.

A. Mother Love
B. Every Mother knows
C. Every Child knows
D. Mother for all

Theme of 2017 Mother’s Day – “Every Mother knows”. Mother’s Day is a celebration honouring the mother of the family, as well as motherhood, maternal bonds, and the influence of mothers in society. It is celebrated on various days in many parts of the world, most commonly in the months of March or May.

Question 6: The first-ever gender-neutral MTV award for Best Actor in a movie has been given to which Hollywood actor?

The gender-specific categories for its acting awards this year have been abolished by MTV for the 2017 MTV Movie & TV Awards in Los Angeles, California, giving the honor for best actor in a movie to Emma Watson for “Beauty and the Beast.”

The Hinduja brothers have topped the 2017 list of the richest people in the UK with a wealth of 16.2 billion pounds, a massive 3. 2-billion-pound hike in their fortunes over the previous year.

Question 8: To which city has the CRPF anti-naxal operations command HQ beenshifted?

The strategic anti-Naxal operations command headquarters of the CRPF has been shifted from Kolkata to Raipur, right into the heart of the Naxal violence hit state of Chhattisgarh by the Centre in the wake of 37 men of the paramilitary being massacred by Naxals in a period of less than two months.

Question 9: Who has been sworn-in as the new President of South Korea?

South Korea’s new president Moon Jae-in has been sworn in and has begun his five-year term. The former human rights lawyer and the son of North Korean refugees is known for his liberal views.

Question 10: Who has become the world’s highest wicket-taker in women ODI cricket?

Jhulan Goswami, former Indian women’s cricket captain and women’s team fast bowler,has become the leading wicket-taker in Women’s One-Day Internationals surpassing the Australian cricketer Cathryn Fitzpatrick’s record of 180 wickets. She has also been awarded the ICC Women’s Cricketer of the Year 2007, Arjuna Award in 2010, and the prestigious Padma Shri in 2012. 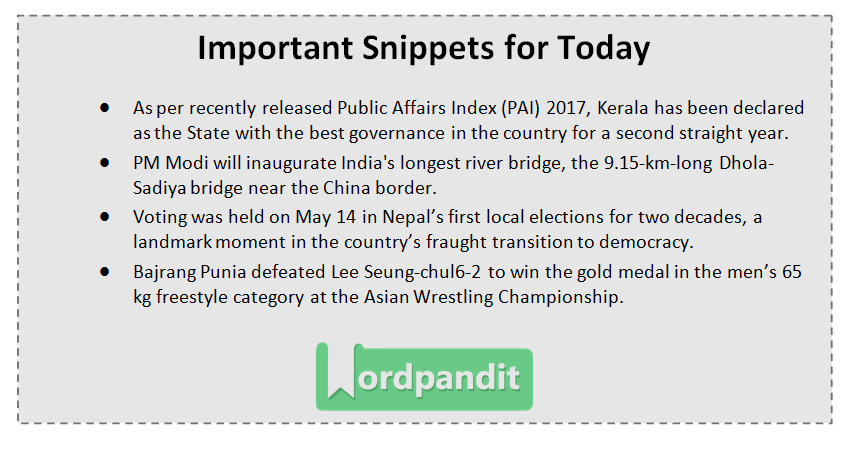