Question 1: Which river is known as lifeline of Madhya Pradesh?

Narmada is known as lifeline of Madhya Pradesh. PM Modi recently launched the Narmada Seva Mission for the conservation of Narmada River.

Question 3: Which tennis player is known as “The King of Clay”

A. Roger Federer
B. Novak Djokovic
C. Rafael Nadal
D. None of these

Rafael Nadal continued his unbeaten run on clay this season after winning the Madrid Masters for the fifth time by defeating Austria’s Dominic Thiem.

Question 4: Who is China’s richest person?

Question 5: How many medals have India won in 2017 Asian Wrestling Championship?

India finished with 10 medals, including one gold, five silver and four bronze at the Asian Wrestling Championship, bettering their tally of nine medals in the last edition at Bangkok.

Question 6: Sale of High in Fat, Salt and Sugar (HFSS) food at school canteens has been banned in which state?

Question 7: Which state is set to issue a house ID for every home?

The Manohar Lal Khattar government has decided to gather a detailed data of every resident and issue a sleek identity for every house in Haryana. During the survey, address of each house, photo, location, details of owner of the house, electricity connection, water connection, details of electronic devices, bank account numbers, IFSC code and other personal details will be collected.

Question 8: Which is the highest grossing Indian film ever?

A. Baahubali 2: The Conclusion
B. Rangoon
C. Kaabil
D. Dangal

SS Rajamouli’s Baahubali 2: The Conclusion has become the first Indian film to cross Rs 1000 crore at the box office, it is now close to collecting around 1500-crore mark at the worldwide market and its Hindi dubbed version is inching towards the 500-crore mark at the domestic box-office.

Question 9: Who will be the Pakistan’s new High Commissioner to India?

Sohail Mahmood, one of Pakistan’s senior-most diplomats, has been chosen as new High Commissioner to India. Mahmood, 55, currently Pakistan’s ambassador in Turkey, was granted a visa by India . He will be succeeding Abdul Basit who was the previous High commissioner of Pakistan to India.

Question 10: In which country is India going to replace its research station ‘Maitri’?

It is proposed to replace the Maitri station at Antarctica in next 3-4 years, incorporating the modern energy conservation systems i.e. CHP units and integrated power generation through wind energy and solar power, a waste conservation and waste disposal strategy through appropriate redesign of wastewater treatment and disposal system capable to recycle treated water to meet Environmental Protocol,. 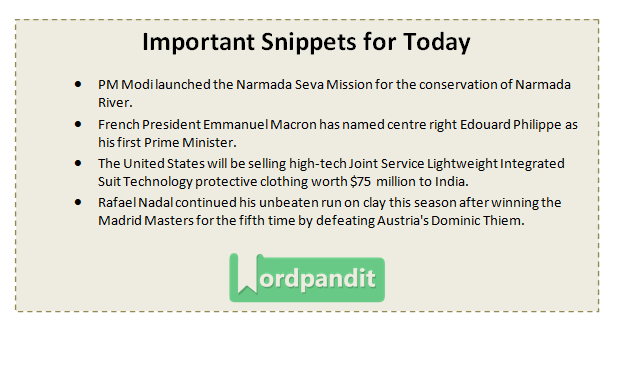