Question 1: What is the name of world’s smallest satellite built by Rifath Sharook?

Rifath Sharook, an 18-year-old student from Tamil Nadu, has developed what he claims is the world’s smallest and lightest satellite named Kalamsat. It will be launched by NASA rocket on June 21.

Question 2: What is the name of the portal launched by government to prevent tax evasion?

A. Clear Money
B. Clean Money
C. Safe Money
D. None of the above

Question 3: What is India’s rank in renewable energy investment index?

India has overtaken the US to become the second-most attractive country after China for renewable energy investment, according to a report by EY

Question 4: Which Tennis player has been denied wildcard for French Open?

Russian tennis player Maria Sharapova has been denied a wildcard for the French Open after failing to qualify on the basis of ranking points.

Question 5: Which country is going to host FIFA Under-17 World Cup?

India is going to host FIFA Under 17 World Cup. The matches will be held in six venues, Kolkata, Mumbai, Delhi, Guwahati, Goa and Kochi.

Question 6: When was Buddha Purnima or “Vesak”, the day of the Full Moon observed ?

Buddha Purnima or Vesak is celebrated with religious fervour by the followers of Buddhism around the world on 10th May. It was on this the day that Gautam Buddha was born and he also attained Nirvana (salvation) under the Mahabodhi tree at Bodh Gaya. The day falls on the full moon night in the Hindu month of Vaisakh.

Question 7: Who has recently been elected as the new chairman of FIFA Governance Committee?

Justice (Retd.) Mukul Mudgal was elected as head of FIFA’s governance committee at the world football governing body’s 67th Congress in Bahrain’s capital city of Manama. His name was proposed by the FIFA Council yesterday after the position of the governance chief after Miguel Maduro fell vacant as he was fired’ for his role in blocking Russian World Cup official Vitaly Mutko from retaining his seat on ruling council.

Question 8: $75 mn high-tech chemical protective clothing for the Indian armed forces has been approved by which countyr?

USD 75 million high-tech chemical protective clothing for the Indian armed forces to protect them against biological and chemical warfare has been approved by the US. The Joint Service Lightweight Integrated Suit Technology (JSLIST) consists of 38,034 each: suits, pairs of trousers, pairs of gloves, pairs of boots and NBC bags; 854 aprons; 854 alternative aprons; 9,509 Quick Doff Hoods; and 114,102 M61 filters.

Question 9: Who has been voted the 2017 Footballer of the Year by the Football Writers’ Association ?

N’Golo Kante was presented with the Football Writers’ Association Footballer of the Year award at the Landmark Hotel in London in recognition of an outstanding season, in which the 26-year-old played an instrumental part in the Blues winning the title.

Question 10: Arjun Tulshiram Pawar, who passed away recently, was related to which field?

Ans. C Senior NCP leader and former Maharashtra minister Arjun Tulshiram Pawar passed away after a prolonged illness. He had for many years represented Kalwan, a constituency reserved for Scheduled Tribes. 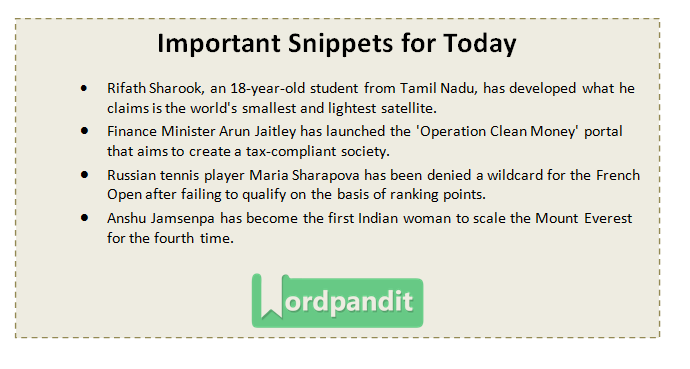