Question 1: Who has been given additional charge of Ministry of Environment, Forest and Climate change?

Minister of Earth Sciences and Science and Technology, Harsh Vardhan, has been given additional charge of the Ministry of Environment, Forest and Climate Change (MoEF) after the demise of Union Minister Anil Madhav Dave.

Question 2: Which state government has launched “She Pad” scheme?

Kerala Chief Minister Pinarayi Vijayan has announced that the government will distribute sanitary pads to girls in all the schools in the state. The system to dispose used pads without harming the environment will be set up as well. The total cost will be approximately Rs 30 crore for five years.

SIMBEX, the 24th bilateral exercise involving Indian Navy and Republic of Singapore Navy has commenced in South China Sea. Full form of SIMBEX – “Singapore-India Maritime Bilateral Exercises“ The exercise will be held from May 18, 2017 to May 24, 2017.

Question 4: India’s first womb transplant was conducted in which city?

Doctors at a Pune hospital successfully conducted India’s first womb transplant by transferring a woman’s uterus to her 21-year-old daughter, who was unable to conceive a child. The surgeons retrieved the uterus using a laparoscopic technique, which shortened the duration of the procedure, bringing it down from normal 12 hours to nine.

Question 5: Which automobile company has decided to stop selling its cars in India?
A. Force Motors
B. General Motors
C. Ford Motors
D. None of these

General Motors will stop selling cars in India from the end of this year, drawing a line under two decades of battling in one of the world’s most competitive markets. General Motors has less than a one percent share of passenger car sales in India. The company will instead focus on producing vehicles for export from India.

Question 6: Which state is at the top for the second consecutive year in the public affairs indexissued by PAC?

Kerala and Tamil Nadu have secured first and second rankings for the second year in a rowin public affairs index (PAI) in governance in States.Karnataka is at the fourth position and Maharashtra at the fifth position.

Question 7: Who has been appointed as the UN’s highest official on humanitarian assistance and aid coordination?

Ans. C
Mark Lowcock,the British humanitarian expert, has been appointedby the Secretary-General Antonio Guterres to be the next UN humanitarian chief.He will take over from Stephen O’Brien, who held the post for two years, serving in what is widely viewed as one of the UN’s most demanding jobs.

Question 8: Which year will be takes as the base year of the all-India Index of Industrial Production (IIP)?

Ans. A The Central Statistics Office (CSO), Ministry of Statistics and Programme Implementation revised the base year of the all-India Index of Industrial Production (IIP) from 2004-05 to 2011-12This will not only reflect the changes in the industrial sector but to also align it with the base year of other macroeconomic indicators like the Gross Domestic Product (GDP), Wholesale Price Index (WPI).

Question 9: The first-ever Bhairon Singh Shekhawat Lifetime Achievement Honour in Public Service has been awarded to whom out of the following?

Question 10: The 43rd edition of G7 summit will be held in which city in Sicily?

The 43rd G7 Summit will take place in Taormina, Sicily on May 26-27, 2017.The leaders of the seven G7 states and the representatives of the European Union will attend the summit. The G7 first started as G6(France, US, UK, West Germany, Japan and Italy) in November 1975 to take up a range of pressing economic issues. Later, the issues went beyond economics and political, security and social issues were added as part of the topics under consideration. Membership was also extended to Canada in 1976 and the EU being given a seat at the summit table. 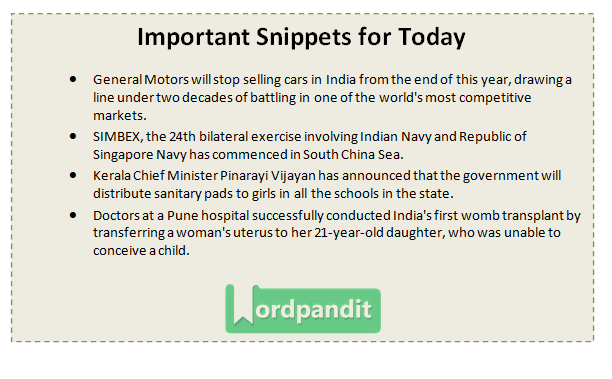