Question 1: Who has been elected as the President of Iran?

Question 2: Hello, the social network, has been created by?

Hello has been founded by Orkut creator Orkut Buyukkokten. The app is still in beta phase, claims to let users build “personas” based on their passions and interests.

Question 4: Which committee has been formed for Desiltation of Ganga?

A. Chitale Committee
B. Justice Dhingra
C. Watal Committee
D. None of the above

The Union Ministry of Water Resources, River Development and Ganga Rejuvenation had constituted this 4 Member committee to prepare guidelines for desiltation of Ganga River last year.

Question 5: Who is the chairman of the GST Council?

The chairman of the GST council is Arun Jaitley.

Question 6: Which Indian village has been awarded the 2017 Smart Village Award?

Govardhan eco village, situated at the foothills of the Sahyadri mountains,is in the Wada taluka of Maharashtra.Run by ISKCON, Govardhan eco village has been given the United Nations award for taking innovative measures of ‘sustainable tourism’ in country.

Question 7: Which sector’s revenue from exports touched an all-time high of INR 2282 crore this fiscal?

India has exported 9.57 Metric Tonnes of coir worth INR 2282 Cr in the financial year 2016-17,which is the highest so far. Coir sector in India has immense growth potential and can provide employment to a lot of people as well.

Question 8: Who has been appointed as the new Prime Minister of France?

President Emmanuel Macron has appointed a conservative prime minister, Edouard Philippe, in a move to broaden his political appeal and weaken his opponents before legislative elections in June.

Question 9: Who is the winner of the 2017 Formula 1 Spanish Grand Prix?

Question 10: In which state is the Nandankanan Zoological Park (NZP) situated?

Nandankanan Zoological Park is located 20 kms ahead of the capital city Bhubaneswar in Orissa. The sprawling,dense, and tranquil forests of Chandaka, Nandankanan has the first captive Gharial breeding center of India. The name that literally means the “Garden of Pleasure” is the most picturesque park. A visit to the park gives an opportunity to discover unique flora and fauna flourishing in their most natural habitat. 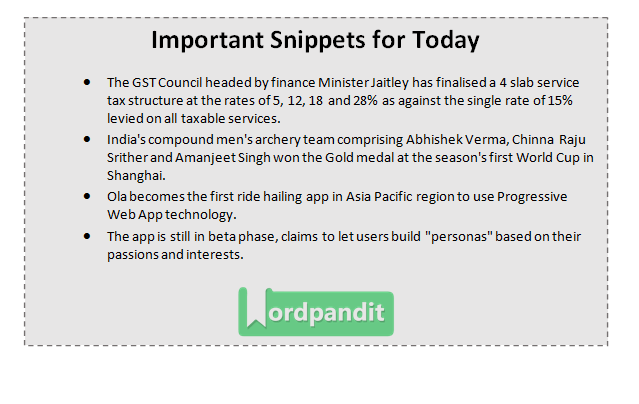