Question 1: Which of the following Indian presidents was recently honored by NASA?

Scientists at NASA have named a new organism discovered by them after former president A P J Abdul Kalam.

Question 2: What is the amount of funds raised by Soft Bank’s Vision Fund?

Question 3: RCEP trade ministers will meet in which country?

Trade ministers of 16 countries, including India, will meet in Vietnam to discuss progress in the ongoing negotiations of proposed mega trade deal RCEP.

Question 4: Who is the First civilian from the Indian Navy to summit Mount Everest?

Brijmohan Sharma has become the first civilian from the Indian Navy to summit Mount Everest.

Every year May 21 is observed as National Anti-Terrorism day because on this day Former Prime Minister of India, Rajiv Gandhi, was assassinated by a suicide bomber while conducting an election campaign in Sriperumbudur in Tamil Nadu.

Question 6: With which country has India signed an expanded PTA with?

India and Chile have signed a pact on the expansion of the India–Chile Preferential Trade Agreement (PTA).This agreement will improve commercial relations between both the countries.

Question 7: Which non-Arab state was the first to recognize PLO in Palestine in 1974?

India registered its vote in 1947 against the partition of Palestine at the United Nations General Assembly. In 1974, India became the first Non-Arab State to recognize PLO as sole and legitimate representative of the people of Palestine. Recently,India and Palestine has signed five agreements in different areas including health, agriculture, and Information Technology.

Question 8: Who has been given the Mark Twain Prize 2017 for American humour?
A. David Letterman
B. Conan O’Brien
C. Johnny Carson
D. Stephen Colbert

David Letterman will receive the 2017 Mark Twain Prize for American Humor, the annual award given out annually by the Kennedy Center in Washington, D.C.

Bajrang Punia won the gold medal on the penultimate day of the Asian Wrestling Championship, after defeating South Korea’s Seunghui Lee 6-2 in the men’s 65kg freestyle category at the Indira Gandhi Sports Complex.

Question 10: The 2017 INSA Young Scientist award for research in cancer treatment has been given to which professor?
A. Aravind Kumar Rengan
B. Dr. Jyotsnendu Giri
C. Subha Narayan Rath.
D. Subbulakshmi Chidambaram

A Indian National Science Academy (INSA) medal in the Young Scientist category for 2017 has been awarded to a professor in the Indian Institute of Technology, Hyderabad. Dr Aravind Kumar Rengan, assistant professor in the department of biomedical engineering at IIT Hyderabad, has been given the award for having devised a novel way of nano-delivery using liposomes and gold nano particles, which is useful for both imaging and therapeutics. 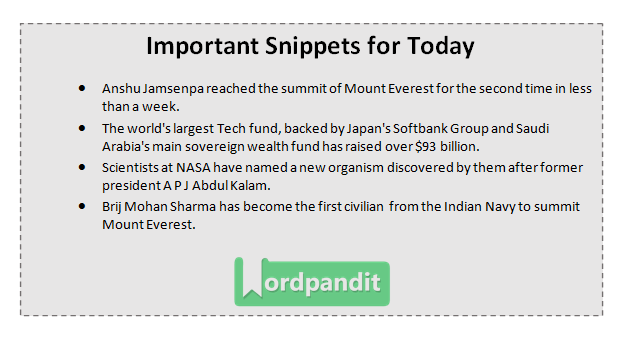