Question 1: Which of the following Indian brands have been featured in top 50 luxury goods firms globally?

A. Gitanjali Gems
B. Titan
C. PC Jewellers
D. All of the above

Indian brands Gitanjali Gems, Titan and PC Jewellers have been named in the list of top 50 luxury goods firms globally.

The Maharashtra government has decided to form ‘good morning’ squads to curb open defecation in all villages and districts across the State.

Question 3: Which country is going to build a war museum in Manipur?

NASA and ISRO will jointly develop and launch the world’s biggest and most expensive earth imaging satellite, costing $1.5 billion.

Mumbai Indians painted the city blue as they clinched an astonishing 1-run victory over Rising Pune Super Giant in the final.

The GVK group-run Mumbai airport has become the world’s busiest airport with single-runway facilities.It handles 837 flights a day or one in 65 seconds on an average in fiscal 2017, taking over London’s Gatwick airport that had 757 flights a day.

Question 7: “KalamSat”the world’s lightest satellite has been designed by Rifath Sharook. He belongs to which country?
A. Mynamar
B. India
C. Russia
D.Brazil

Rifath Sharook, the class 12 student from Tamil Nadu, has built this satellite that fits into a 4 centimetre cube and weighs 64 grams. The satellite will be launched by the US-based National Aeronautics and Space Administration (NASA).The satellite has been named after the former president and one of India’s greatest nuclear scientists Dr. APJ Abdul Kalam.

Question 8: Operation Clean Portal for transparent tax administration has been launched by which Union Minister?

The Income Tax Department (ITD) has started Operation Clean Money was initiated by on the 31st January, 2017 with the launch of e-verification of large cash deposits made during 9th November to 30th December 2016. This has been done for a transparent tax administration and enable a tax compliant society.

Question 9: The International Cricket Council has increased the prize money to what amount?

Question 10: A cure for which deadly virus have been found scientists in the United States?

A team of scientists from the United States have discovered a possible cure for all five known Ebola viruses, one of which ravaged West Africa in recent years.This will help in the treatment of Ebola viruses. The antibodies found can be used as single therapy treatment for all Ebola viruses. 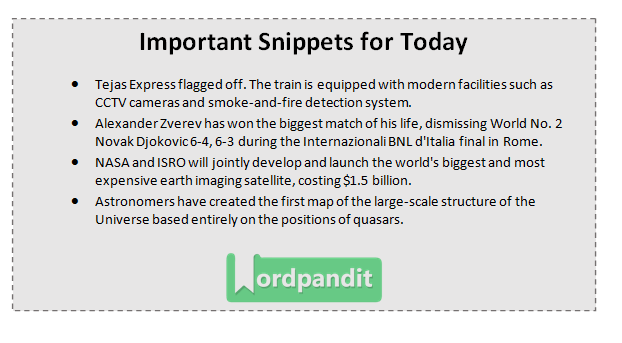