Question 1: Which country has registered its 1st ever win over Test nation, Sri Lanka?

Scotland defeated Sri Lanka in a 50-over practice match in England to register their first-ever win over a Test-playing nation.

Question 2: Roger Moore passed away. He was a famous

Actor Sir Roger Moore, best known for playing James Bond, has died aged 89. Moore starred as Bond in seven films, including Octopussy and The Man with the Golden Gun.

India’s first underwater tunnel, which was built under the Hooghly river for establishing a metro link in Kolkata, has been completed before the deadline.

Question 4: Which state government has made Aadhaar mandatory for taking board exams from 2018?

Uttar Pradesh Chief Minister Yogi Adityanath has made Aadhaar compulsory for students appearing for board examinations in 2018.

Paytm has launched its Payments Bank operations in Delhi-NCR, with 4% interest on savings account

Question 6: Javier Valdez, the renowned journalist has passed away, belonged to which country?

Javier Valdez, an award-winning reporter and the co-founder of the newspaper Ríodoce in 2003,was murdered in the northern Mexico state of Sinaloa, the latest in a wave of journalist killings in one of the world’s most dangerous countries for media workers.

Question 7: The birth name of which veteran Bollywood actress was NayanBhadbade?

Question 8: Who has become the first Indian woman to scale Mount Everest for the fifth time?

Arunachal Pradesh’s Anshu Jamsenpa, a 32-year-old mother of two, has scaled the mount Everest twice. On her first attempt in 2011, she had conquered the 29,029 ft peak twice in 10 days between May 12 and May 21. Her third successful attempt was on May 18 two years later. Her ascent of the world’s tallest peak in the Himalayas at 7.45 am on Sunday was her fifth overall, and the second after May 16, setting a women’s record for a double ascent of the world’s highest mountain in a single season.

30 years after the Bofors scandal new artillery guns, the first two M-777 A-2 (Indian) ultra-light howitzers (ULH) from BAE systems have been received by the Indian Army. This is the installment of the 145 guns ordered.

Question 10: Which scientist has been awarded the Dan David prize 2017?

Each year, the Dan David Prize, endowed by the Dan David Foundation, awards three prizes worth $1 million each for achievements having an outstanding scientific, technological, cultural or social impact on our world. Kulkarni, Gehrels, and Udalski will split the prize for the category. 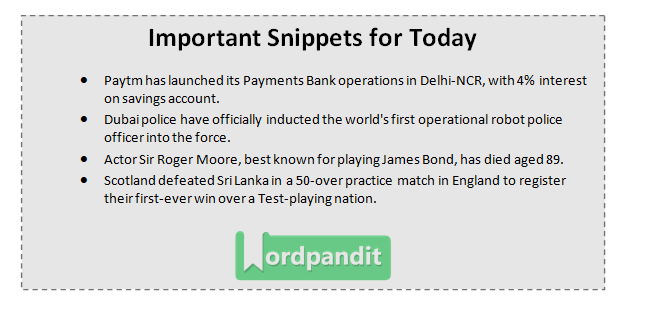