Question 1: Madhya Pradesh government has signed MOU with which institute for the development of a Happiness Index?

IIT Kharagpur’s Rekhi Centre of Excellence for the Science of Happiness has signed an MoU with Madhya Pradesh government to collaborate on the development of a Happiness Index for measuring the well-being of the people of the state.

Question 2: Rating agency Moody’s has recently downgraded which country to an A1 rating from AA3?

Rating agency Moody’s has downgraded China’s long-term local and foreign currency issuer ratings by one notch to an A1 rating from AA3.

Question 3: Who among the following has been named best international cricketer of the year?

Ravichandran Ashwin has won the coveted International Cricketer of the Year award at the CEAT Cricket Rating (CCR) International awards 2017.

Question 4: What is the full form of FIPB?

Full Form of FIPB is Foreign Investment Promotion Board. FIPB is the inter-ministerial body or a single window clearance mechanism for applications on foreign direct investment in India in sectors under the government approval route.

Federal Bank, in association with Geojit, has launched a new trading platform called “Selfie” for customers.

Question 6: Which Indian personality has been named in the Forbes’s 2017 Global Game Changers list?

Mukesh Ambani, the 60-year-old chairman of the retail conglomerate Reliance Industries,is among the business leaders who are transforming their industries and impacting billions of lives in the process. Ambani is the only Indian in the list that comprises business leaders from eight different countries.

The Environment minister Anil Madhav Dave has had an untimely demise. Prime Minister Narendra Modi was one of the first to offer condolences for the loss of the 60-year-old.Mr Dave had been the architect of BJP’s resurrection in Madhya Pradesh since 2003.

Question 8: Which Indian wildlife activist has won the 2017 Whitley Awards?

This prestigious international prize honours exceptional individuals working on the grassroots level nature to conserve natural habitat in the world’s developing countries, and are often challenged on humanitarian, environmental and political basis in the projects they undertake.Sanjay Gubbi has been awarded for reducing deforestation in Karnataka’s tiger corridors in India.

Question 9: The 2017 National Geographic Bee contest has been won by which Indian-American student?

Question 10: Bhindawas Bird Sanctuary, soon to be turned into a tourist resort, is situated in which state?

Manohar Lal Khattar,Haryana CM said that the Bhindawas Bird Sanctuary in Jhajjar, a heaven for the migratory birds, would be developed as a beautiful tourist destination. 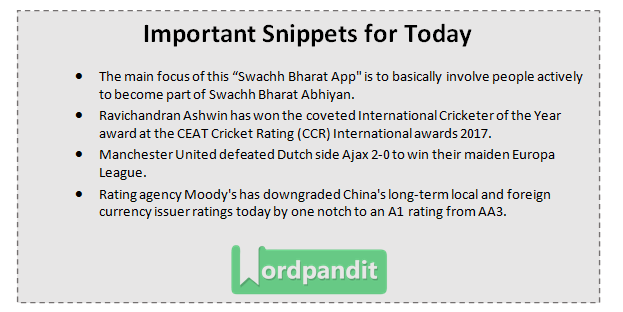