Question 1: Which city has been ranked the world’s second most densely populated city?

Mumbai, home to 31,700 people per square kilometer, has been ranked second in the list of world’s most crowded cities, released by World Economic Forum.

SBI has launched a national hackathon for developers, startups and students to come up with innovative ideas and solutions for the banking sector.

Question 3: What is the name of Nepal’s PM who recently resigned?

Pushpa Kamal Daha has resigned recently. He was elected as the 39th prime minister of Nepal after forging alliance with the Nepali Congress

Question 4: Who is going to host Asian Junior Tennis Championship 2017?

HCL is going to host Asian Junior Tennis Championship 2017.Players from 11 countries in the region are participating in the Championship.

Question 5: Who among the following have joined Paytm Payment’s Bank board as independent directors?

A. PV Bhaskar
B. Ash Lilani
C. GS Sundararajan
D. All of the above

PV Bhaskar, Ash Lilani, and GS Sundararajan have joined the board as independent directors.Paytm CEO Vijay Shekhar Sharma will act as a non-executive chairman, and Paytm Payments Bank CEO Renu Satti will serve as a director on the bank’s board.

Question 6: “SIMBEX-17” bilateral maritime exercise has been held between India and which country?

The Indian Navy and the Singapore Navy have concluded a week-long bilateral military exercise in the South China Sea, during which they conducted a series of advanced naval warfare drills, including air defence exercises and gunnery live-firings.The Singapore India Maritime Bilateral Exercise 2017 (SIMBEX-17) concluded on May,24,2017. There was a display of Singapore’s F-15SG fighter jets. This year’s exercise is the 24th iteration of the annual bilateral exercise held since 1994.

Question 7: Who is the winner of the 2017 Intel International Science and Engineering Fair (ISEF) award in the environmental engineering category?

In the world’s largest pre-college science competition in the US in the environmental engineering category, an Indian student has won the award for his project on bio degradation of pesticides. Prashant Ranganathan, a 12th grader from Jamshedpur, and other 20 high school students from various parts of India, participated in the Intel International Science and Engineering Fair.

Question 8: Which team secured the top position in the ICC test rankings with 123 points in May 2017?

Question 9: The southern states of Karnataka, Kerala and TN have commenced a census of which animal?

The southern states of Karnataka, Kerala and TN have commenced an elephant census.

Question 10: Which year has been selected by WMO as year of polar prediction?

In the WMO Executive Committee meeting held in Geneva, Switzerland,the World Meteorological Organization (WMO) officially launched the state of the Year of Polar Prediction (YOPP) from the middle of 2017. 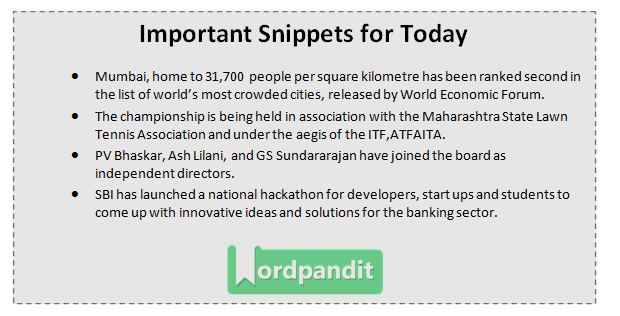