Question 1: Who among the following got honorary degree from Harvard?

Mark Zuckerberg received an honorary doctorate degree from Harvard. He received the degree 13 years after dropping out from the University.

Question 2: India’s longest bridge in Assam has been named after whom?

PM Modi announced that the bridge will be named after Dr Bhupen Hazarika, a noted playback singer, lyricist, musician, poet, and filmmaker from Assam.

Question 3: Which among the following is the only Indian company to be named among the top 10 consumer financial services?

A. Ujjain finance
B. SBI
C. HDFC
D. None of these

HDFC has be named among the top 10 consumer financial services companies in the world.

Question 4: Government has selected 5 Merchant bankers for stake sale of which company?

Question 5: Who among the following was honored by Authors Guild?

Question 6: The 2015 Indira Gandhi Peace Prize has been given to which organisation?

‘Indira Gandhi Prize for Peace, Disarmament and Development for 2015’ was presented by the former Prime Minister Manmohan Singh to the United Nations High Commissioner for Refugees (UNHCR). Singh, who is trustee of Indira Gandhi Memorial Trust (IGMT), gave the prize to UNHCR India Chief of Mission, Yasuko Shimizu.

Question 7: R R Laxman is associated with which sports?

Question 8: Stanley Greene, the award-winning photojournalist passed away, belonged to which country?

The American war photographer Stanley Greene, was a Black Panther activist before becoming a photojournalist, including reports in Afghanistan, Darfur and Rwanda. Mr. Greene was one of the few African-American photographers who worked internationally.

Question 9: Which country is the second-largest producer of steel after China?

India has emerged as the second – largest producer of steel in the world in 2016, according to the data released by International Stainless Steel Forum (ISSF).

Question 10: The mining of which commodity has been banned in Madhya Pradesh?

The Madhya Pradesh government has ordered a complete ban on sand mining from the Narmada river. The ban will be effective in all the 18 districtsof Madhya Pradesh through which the river flows. 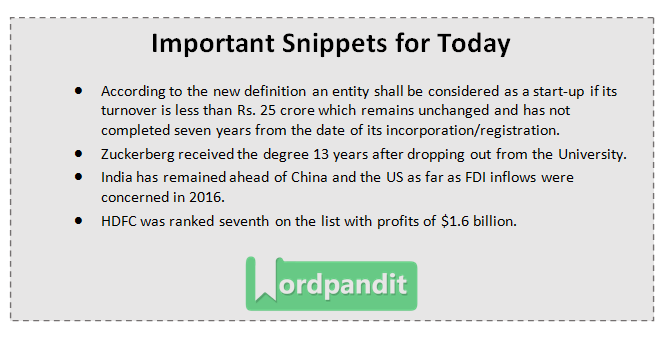