No Man in an Island,rather we are social beings and this root word Greg signifies that. The root word Greg comes from the Latin word grex which means ‘a group or a herd’.

What do you enjoy more? Being out and about with your friends and meeting new people or being curled up in your bed and spending time alone reading or watching something? If you chose the first option you can be described as an Extrovert.

Another word used for extroverts which comes from Greg root word?

Gregarious, which means always with the group, we also use it to describe animals that move or live in a herd. In this article on the Greg root word we present to you more words based on this root word: 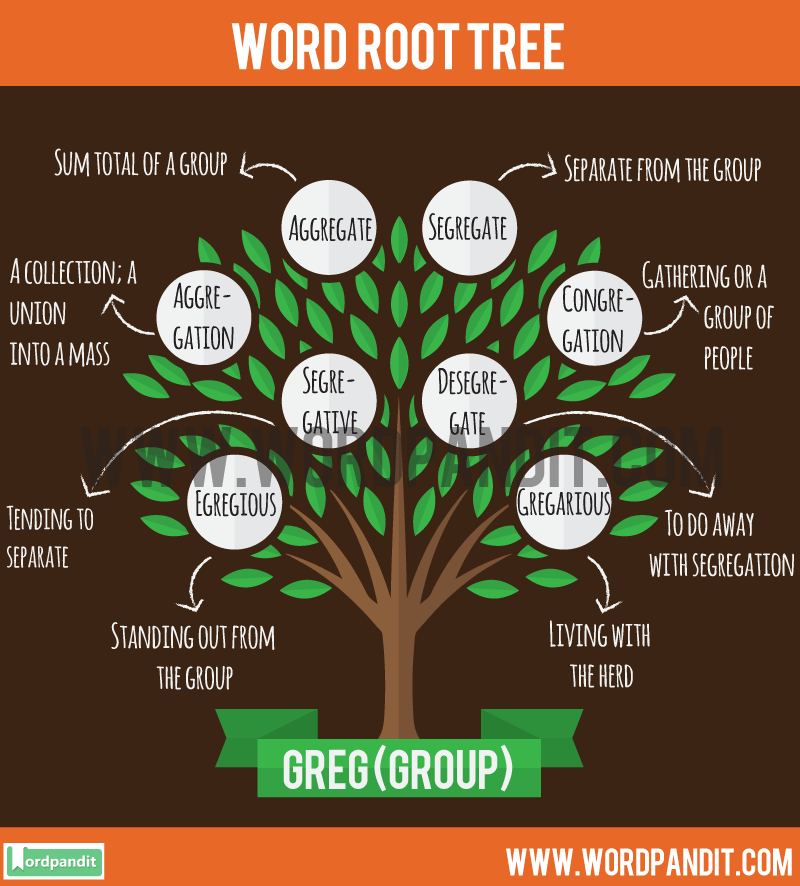 Words Based on the Greg Root Word

Following is a list of words based on Greg root word:

1. Egregious: Standing out from the group in favorable sense
2. Segregative: Tending to separate, to set apart
3. Segregationist: One who believes in segregation
4. Antisegregationist: One against segregation
5. Desegregate :To do away with segregation
6. Aggregator: Someone or something which aggregates.
7. Aggregation :A collection; a union into a mass
8. Gregarine: Any of various sporozoan protozoans of the order Gregarinida that are parasitic within the digestive tracts of various invertebrates including arthropods and annelids.
9. Gregorian: Of or pertaining to the Gregorian Calendar.
10. Gregicide: To slaughter or murder groups of people or other creatures.
11. Vixigregarious: Sparsely distributed; occurring in small, poorly defined arrangements.
12. Aggregatory :Assembled; of the nature of an assembly.
13. Aggregable :Can be collected; can be united.
14. Grego: A type of rough jacket with a hood.
15. Gregale: A strong Mediterranean wind blowing from north-east.
16. Gregal: Pertaining to, or like, flock.
17. Aggregate: Sum total of a group.
18. Segregate: Separate from the group.
19. Congregation: Gathering or a group of people.
20. Gregarious: Living with the herd.

We hope this Greg root word will help you enhance your vocabulary as using the method of word roots is an effective and fun method to remember words and improve your vocabulary.